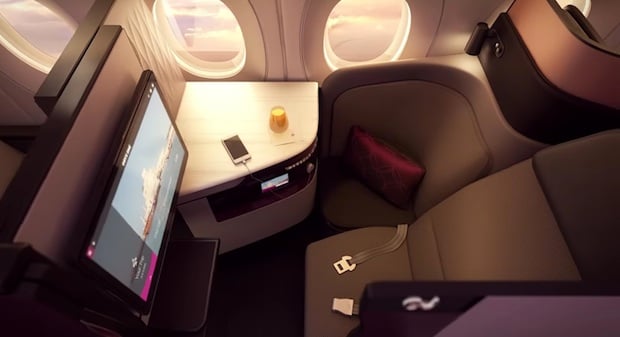 The new design features privacy doors and a configurable layout for the central rows to enable passengers to face each other as a group of four (with monitors sliding to the sides).

Alternatively, in conventional pairs with monitors up, two seats can recline into flatbeds and in a double bed configuration claimed to be the first-ever in Business Class.

The new layout is designed to appeal to executives on meetings, families and couples. It is being launched alongside a new selection of sharing dishes available throughout the flight.

Speaking at the unveiling at the ITB Berlin travel show, chief executive Akbar Al Baker said that the airline was “raising the bar for business travel”.

The first aircraft a B777 on the carrier’s Doha to London route in June, according to the CEO.

“We will then have an aggressive retrofitting programme. So our first product from the manufacturer will be on our B777 new order followed by the A350-1000 and it will be delivered installed by Airbus,” Al Baker added.

Alongside the offering the airline is also launching a new inflight entertainment interface and express breakfast service for those that miss the main breakfast.