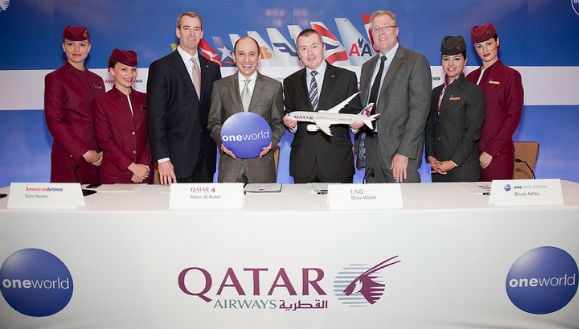 Qatar Airways will become a full member of the oneworld alliance from 30 October this year.

The carrier, rated five-star by airline quality agency Skytrax, will become the only one of the ‘Gulf Big Three’ to join any global airline alliance.

Qatar’s flagship airline completed a review of its readiness, conducted by British Airways, and will be sponsored by the UK-based carrier as it joins the oneworld team.

Qatar received its invitation to join in October last year. The 12-month turnaround period will be one of the fastest in the alliance’s history.

“In Qatar Airways’ relatively short history, we have quickly established a reputation for innovation, quality and excellence in everything we do,” said Qatar Airways chief executive officer, Akbar Al Baker.

“We are pleased to build on that by becoming the only major airline from the Gulf to date to be joining any of the global airline alliances.

“We are proud to entering the best of them, in oneworld – and to be doing so in record quick time.”

Qatar Airways’ inclusion in the alliance is expected to come shortly after the carrier makes its much-delayed move into its new home at Hamad International Airport.

From 30 October, members of Qatar Airways’ Privilege Club loyalty programme will be able to use their frequent flyer privileges when they fly with any oneworld member airline, including the earning and redeeming of Qmiles and Qpoints.

Privilege Club Platinum and Gold members will have access to 550 airport lounges worldwide when they fly with one of the alliance’s members.

Likewise the 130 million members of oneworld alliance’s frequent flyer programmes will have access to benefits on Qatar Airways.

“Quality has always been the hallmark of oneworld, so we are pleased to be adding to our alliance another of the world’s highest quality airlines, in Qatar Airways,” oneworld CEO Bruce Ashby said.

“Qatar Airways will significantly improve our connectivity between many of the destinations that are most important to those customers.”