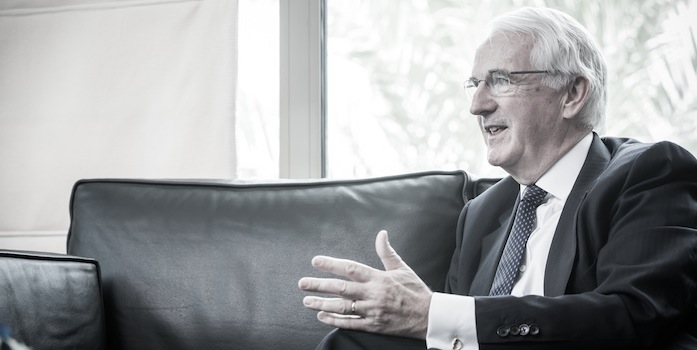 Despite concerns over another property market bubble in Dubai and inflated prices that some commentators have said could lead to another downturn, the Jumeirah Group chief executive officer told Gulf Business that the city’s economy was in rude health. Jumeirah is recognised as a leading hotel chain in the Middle East. The firm also operates a serviced apartments business in Dubai and London – a brand known as Jumeirah Living.

Asked if he was nervous about the trickle-down effects of any international shocks, Gerald Lawless indicated that Dubai was future-proofed against such scenarios. “Dubai has really been established as the regional commercial centre,” he said. “We have 50,000 square metres of office space in the Emirates Towers and it’s full. More and more organisations and companies are using Dubai as a regional base.

“That’s driven first of all by the fact that Emirates Airlines flies you to virtually anywhere non-stop. At the same time, we have fabulous hotels at all levels. As well as that you have a world-class infrastructure. People are coming here and they are not leaving.

“The property market has matured well since the financial crisis. You now have to pay transfer tax and many developers will not allow you to flip your property until you have paid the majority of it off. It’s not a runaway market like it was but I think it’s a very healthy growing market. I think the demand will continue on a sustainable basis.”

Given that growth in China and America had slowed while Europe was in decline and Russia recently struggled with a currency crisis – not to mention the low oil price in the Middle East – economists have predicted troubled times ahead for the global economy. But Lawless insisted that Dubai was insulated from worldwide financial fluctuations.

“We very quickly came through the worst shock since 1930 between 2009 and 2012,” he said. “But even during that period, our tourism business held up. Yes, we had a drop in average room rates but they’ve started to come back and will continue to do so. It’s the hotels, the airlines and the support by the government for tourism that are the catalysts. It’s a cohesive strategy where everybody talks to each other. The public private partnership works really well.

“Year-to-date in our Jumeriah hotels in Dubai we have had an 83.5 per cent occupancy rate. Last year was 82.7 per cent so we are slightly up. As one door closes, another opens. We saw dilution in the Russian market but a lot of demand coming from the United Kingdom, which has become our top market so far this year. However, the Russian market is still at number two. Strange enough, I think that at the top end of the market, the Russian business has not been as badly affected.”

In addition, Lawless claimed that tourism was a significant global industry in its own right – a fact that had solidified Dubai’s positive economic standing. “Figures from the World Travel and Tourism Council show that the total number of jobs provided by the industry is 207 million,” he said.

“That’s just under 9 per cent of the global labour force. And global gross domestic product contribution from the industry is coming in at almost 10 per cent. Tourism is one of the pillars of the Dubai economy and it is between 20 and 30 per cent of the city’s GDP. People shouldn’t think that tourism is not a real industry.

“The entry-level jobs have always been there in the tourism industry but now employers are offering really great careers for people worldwide. It’s been an inspired move to use tourism as one of the pillars of the Dubai economy.”