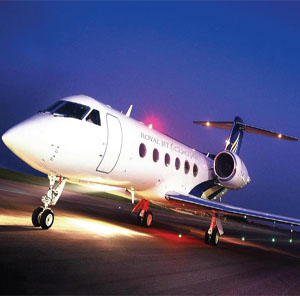 While the commercial aviation market nosedived during the Arab Spring this year, regional private jet usage soared. In times of crisis, the need for urgent high-level talks and diplomatic relations increases, as does the need for convenient, safe transportation.

“This year, the regional private jet market will grow by around seven to eight per cent, having experienced negative growth of 10 to 11 per cent in 2010,” said Shane o’Hare, CEO of Abu Dhabi-based Royal Jet. “The private jet market is maturing, and we are getting to the places airlines don’t fly to.”

“Global crises can stimulate the need for more travel because of the need for more delegations and summits. Last year there were also an unprecedented number of summits and meetings, both at a global level and regional level, directly caused by the economic crisis, and that’s good for our business. This is where our business is quite unique,” said o’Hare.

The dwindling corporate market has tempered the growth of the private jet industry, as jittery businesses made travel cutbacks to protect their bottom lines in an uncertain economic climate. Semi- government-owned royal Jet services a mix of corporate, government and presidential sectors.

“Corporate travel represents about 20 per cent of our business. It accounts for around 50 per cent in the US, 30 per cent in Europe and 20 per cent here,” said o’Hare. “It’s up and down, so our growth this year has been balanced out by different factors.”

In a nod to the growing demand for chartered services, the private jet firm recently launched its Premium connect service for UAE airline Etihad’s VIP customers, allowing customers to switch directly from a commercial flight to a private jet and fly to the destination of their choice.

“The old adage that time is money has become increasingly important. Premium connect offers a seamless global network and can connect customers from Abu Dhabi to anywhere in the world,” said o’Hare. “The private jet industry is maturing very quickly and the consumer is increasingly understanding the value of private jet travel, security and check-in times. People want to travel when they want to travel.”

Royal Jet is also counting on its thriving medical tourism business as a growth pillar. The firm currently has 11 aircraft, seven of which can be utilised for medical services. Royal Jet provides an on-board medical service, which can be compared to a flying hospital, and Europe, Asia, Bangkok in Thailand and Washington in the US are currently the most popular destinations for health trips.

From 2008 onwards, Royal Jet identified a five-year expansion strategy that is aimed at creating solutions to address the Middle East’s business aviation growth in conjunction with Abu Dhabi’s wider 2030 vision to boost traffic and tourism to the emirate.

The Abu Dhabi tourism authority released its report on the industry’s first-half year performance at the end of July, showing that the emirate’s hotels hosted more than one million guests during the first six months of the year, an increase of 11 per cent over the same period in 2010.