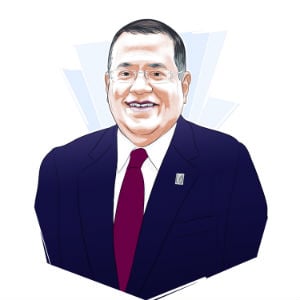 Emirates NBD has seemingly turned a corner. After a difficult year in 2012, the fortunes of Dubai’s largest bank have improved significantly in 2013.

Second quarter earnings rose to Dhs971.6 million ($264.5 million), a year-on-year increase of 50 per cent. The bank has lowered its bad debts forecasts, and has paid back Dhs7.8 billion ($2.1 billion) of crisis-era funding to the Ministry of Finance.

While its financial indicators improve, turnover of top staff continues. It was announced in July that Shayne Nelson, formerly chief executive of Standard Chartered’s private banking operations in Singapore, will replace Rick Pudner as CEO at the end of 2013, following the latter’s resignation in April.

On the wealth management level, Arjuna Mahendran joined the bank in July as chief investment officer (CIO) for the Wealth Management Division, joining from HSBC Private Bank, where he held the position of managing director and chief investment strategist for Asia.

Mahendran replaces Gary Dugan who left the bank to take up a role with Coutts as CIO, Asia and the Middle East. Emirates NBD also lost Mark McFarland, its chief investment strategist, private banking, to Coutts this year, where he joined as global chief economist.

Mahendran says his immediate priority is to build upon the positive results that the bank has witnessed in the past year.

“The results have been positive and the willingness is there to expand at a much faster rate across a number of areas, including private banking. My immediate priority is to see that we establish a proper base for that growth, get the appropriate people, and put in place the appropriate structures so that we can really make a big name for the bank in the years to come.”

As the second largest bank in the UAE by assets – the bank was pipped to the top spot in April by National Bank of Abu Dhabi – Mahendran says Emirates NBD has an advantage over international players operating in the local market.

“The edge that particularly Swiss banks held over local institutions has been eroded over time. Clients are much more comfortable with relationship managers sitting in their own territories who are easily accessible. Cultural norms also come into play. There’s a greater opportunity for local banks to thrive in this area.”

While regional banks did not offer some of the more complex products of their international counterparts, such as CDOs and structures linked to high frequency trading, their absence does not point to a lack of sophistication in the market, says Mahendran.

“I don’t think such structures are necessarily a benchmark for a financial market having arrived. More straightforward hedging instruments like futures and options, put and buy options are quite sufficient to grow markets. In Asia we’ve seen growth without dipping their toes into some of those products.”

Emirates NBD continues to encourage clients to diversify their portfolios away from traditional favorites such as real estate and sukuk. Mindsets are beginning to change as a new generation becomes better acquainted with different asset classes, says Mahendran.

“This means that financial markets will continue broadening and deepening in terms of complexity, which is a good thing. The wider proliferation of financial instruments will create more efficient capital markets that will benefit the region.”

Emirates NBD announced a deal in December to acquire the Egyptian operation of BNP Paribas, with the deal being completed in June. Despite ongoing political turmoil in the country, Mahendran is convinced of its private wealth growth potential.

“From the meetings we’ve had there are a lot of very wealthy and sophisticated investors there.”