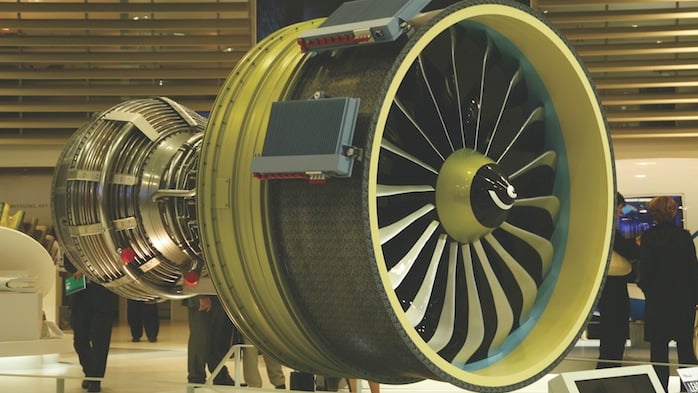 It was just over a year ago when GE Aviation broke an important record in aviation – that of the largest ever- commercial jet engine order awarded to an engine-maker from an airline.

At the Dubai Airshow in November 2013, GE Aviation announced that Dubai-based carrier Emirates had agreed to an $11 billion order for 300 GE9X engines for its new Boeing 777X fleet – 150 of which had been ordered by the airline at the same show.

To those in the industry, the 777x is exactly the kind of aircraft that Gulf carriers like Emirates have been gunning for – a twin-engine jet able to fly long-haul routes with payloads comparable to the larger jumbos.

This, however, would not be possible without manufacturers building engines that are lighter, more fuel efficient and not prone to maintenance issues. The answer, according to GE Aviation, lies in additive manufacturing and 3-D printing.

For many of us, 3D printing is an upcoming technology that periodically hits the news when someone prints a whole rifle or (reportedly) a whole car over 44 hours.

However, the real value of 3D printing lies in precision engineering, and the people at GE Aviation have been quick to realise that. Greg Morris, additive business development and strategy leader at GE Aviation, explains that the firm uses a technology called Direct Metal Laser Sintering.

This is a technique that uses a laser as the power source to sinter (or melt) powdered material, aiming the laser automatically at points in space defined by a 3D model, binding the material together to create a solid structure.

Morris once headed his own firm, Cincinnati, US-based Morris Technologies, which introduced this technology to North America after it was developed by a firm out of Munich.

“We began working with customers like GE Aviation and others in the beginning on various applications,” he says. “We quickly found that GE engineers and designers had a real appetite for direct parts because you could build complex parts using real world materials really quickly.”

Understanding the significance and use of this technology, GE Aviation acquired the assets of Morris Technologies, and its sister company, Rapid Quality Manufacturing in a late 2012.

It’s the Lean Lab where the real action is. At the time of our visit, the Lean Lab was undertaking the pilot production for fuel nozzles meant for GE’s LEAP and 9X engines. Fuel Nozzles are generally assembled from about 20 different parts. With additive manufacturing, the engineers at GE Aviation can build a nozzle as one unit through the successive layering of materials.

Morris explains that in this process, the designers at GE Aviation first send in digital designs to the Lean Lab, where engineers then use computer aided design software to slice horizontal cross-sections or layers in to the design.

Then the 3D printers kick in, using a laser beam to fuse successive layers of raw metal powder, each 20 microns thick, to the desired shape. Having seen it in person, we can affirm that it’s almost like a painter wielding a brush on canvas, which is wiped clean at set intervals, starting the painting all over again.

“It’s almost like a micro-weld,” Morris says, adding that little scrap is generated in this process.

Morris says that additive manufacturing allows the management of complex designs that previous processes would be unable to implement. Moreover, these parts tend to be lighter than traditional forged parts because they don’t require the same level of welding.

“In our business, weight saving is a huge factor. Every pound we are taking out of our engines is of huge benefit to our customers in terms of fuel saving,” he says.

Morris reveals that the fuel nozzles are manufactured in cobalt-chromium, an alloy that has the right characteristics for a complex part such as the fuel nozzle. The material comes from the medical field – it has been used for decades for joint replacements and dental implants.

Cobalt-chromium is light, tough and corrosion resistant, and can operate in temperatures as high as 1,000 degrees Celsius. Also, it is relatively cheap, given the large medical market it already serves.

Leaping to the 9X

GE will invest $50 million in the existing 300,000-square-foot facility to prepare for the additional work.

The Auburn facility will specifically manufacture the fuel nozzle for GE’s LEAP engine, being developed by CFM International, a joint venture of GE and Snecma (SAFRAN) of France.

The LEAP engine, which will enter airline service in 2016, will power the new Airbus A320neo, Boeing 737 MAX and the Chinese COMAC C919 aircraft.

In an analyst meeting in 2013, David Joyce, president at GE Aviation pointed out that by the time the GE9X goes into service, the technologies on LEAP and GEnx will have 60 million hours of operation and service.

“There will be 6,000 engines out, but those technologies are already flying by the time we start entering the service on the 9X,” he said.

In the future, Morris sees additive manufacturing being used more extensively across engine parts. “This [technology] is faster than traditional methods,” he says, allowing engine makers like GE to stick to delivery schedules.

“In the future, additive manufacturing will also influence how we think about parts,” he says. “I believe what we can do with 3D printing will dictate how parts and engines should be and not how they are made.”