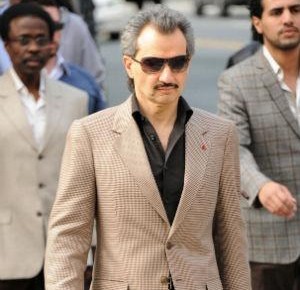 Shadi Sadeek Sanbar, who has worked with the firm for more than eight years and is seen as a close aide of the Saudi billionaire, will leave the firm at the end of the year, the sources said, requesting anonymity as the matter has not been formally announced.

Another source familiar with Kingdom Holding said Sanbar, 66, is retiring from the firm and will move with his family to the United States. He will continue to be on Kingdom’s board of directors, the source added.

Alwaleed is a closely-watched figure in international markets because of investments through Kingdom Holding in companies such as Citigroup Inc and Rupert Murdoch’s News Corp.

Sanbar is leaving to spend more time with his family, a second Saudi-based banking source said, adding deputy chief financial officer Mohammed Fahmy Soliman was seen as the most likely candidate to replace him.

Sanbar will be the second senior executive to leave Kingdom in recent months. In June, Ahmed Reda Halawani, the company’s executive director of private equity, resigned for personal reasons, Kingdom had said in a statement at the time.

Kingdom said last month that its third-quarter net profit had risen one per cent. The investment firm’s shares have risen seven per cent on the Riyadh bourse year-to-date.