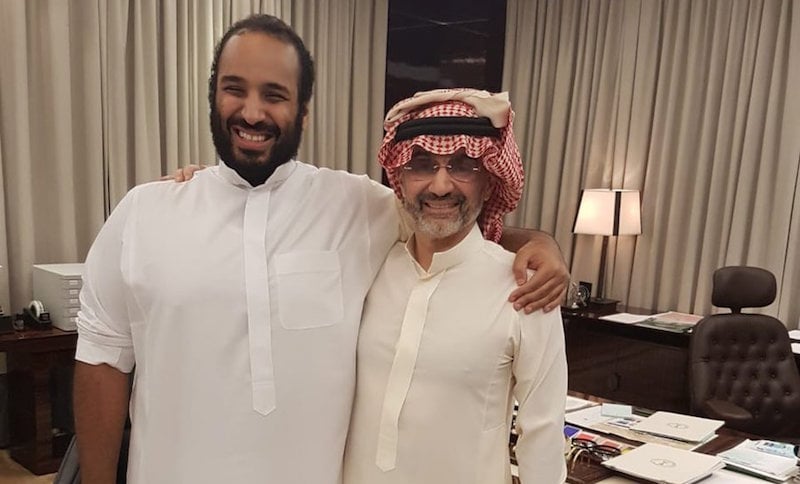 It was the first publicly announced meeting between the two royals since Prince Alwaleed was released in January after being detained for nearly three months last November during a corruption sweep that was spearheaded by Prince Mohammed.

Taking to Twitter, Prince Alwaleed posted a photo of the two men smiling and hugging in front of a desk.

“I was honoured to meet with my brother HRH the Crown Prince and to discuss economic matters and the private sector’s future & role in #Vision2030 success. I shall be one of the biggest supporters of the Vision through @Kingdom_KHC & all its affiliates,” he wrote.

I was honoured to meet with my brother HRH the Crown Prince and to discuss economic matters and the private sector's future & role in #Vision2030 success.

I shall be one of the biggest supporters of the Vision through @Kingdom_KHC & all its affiliates. pic.twitter.com/wgIBqR8E9D

Prince Alwaleed, one of the country’s top international investors, was detained for nearly three months at the Riyadh Ritz-Carlton hotel, along with hundreds of royals, senior officials and businessmen, as part of a crackdown on the orders of Crown Prince Mohammed bin Salman.

In an interview conducted hours before his release, he told Reuters he maintained his innocence and expected to keep full control of his firm. But when asked, he did not rule out making a donation to the government in return for his freedom.

He also denied reports that he was mistreated or facing investment restrictions after his release.

Speaking to Bloomberg TV, the businessman said doctors would see him twice a day at the luxury hotel, used as a temporary prison, and the “best food service” was offered to detainees.

He also asserted of his support to the Crown Prince, stating contact between the two happens every week via texts and calls.

“I told them my vision right now is behind bin Salman, this guy is not only as strong as before, stronger, and this is shocking to many people,” he said.

Most of those detained were released after allegedly reaching financial settlements with the authorities.

The Saudi attorney general said at the end of January a total of nearly $107bn in settlements was received from those released in the form of real estate, commercial entities, securities, cash and other assets.