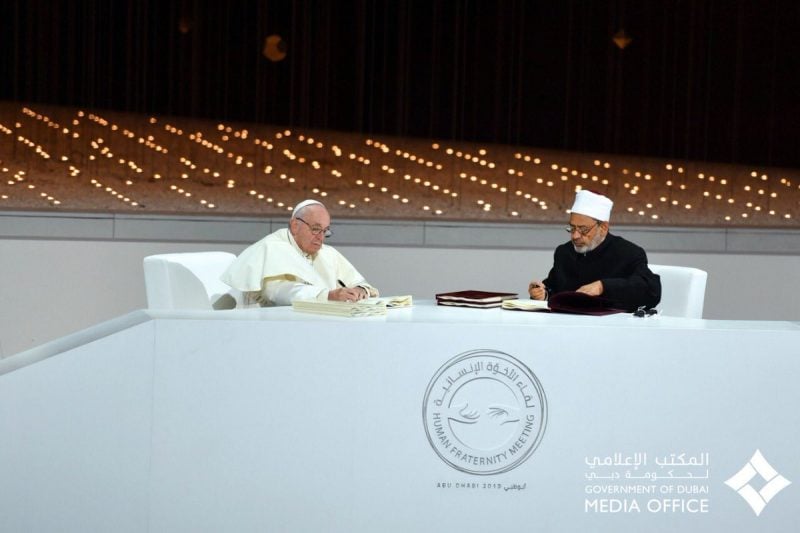 Pope Francis denounced the “logic of armed power” in Yemen, Syria and other Middle East wars on Monday on a landmark visit to the Arabian peninsula where Islam emerged, telling Christians and Muslims that conflicts brought nothing but misery and death.

Francis, the first pontiff to set foot on the peninsula, was speaking during a trip to the UAE, which is playing a leading role in Yemen’s conflict as part of a Saudi-led military coalition.

“War cannot create anything but misery, weapons bring nothing but death,” he said in a speech after meeting UAE leaders in the capital Abu Dhabi on Monday, the first full day of a trip he hopes will foster peace through religious dialogue.

“Its fateful consequences are before our eyes. I am thinking in particular of Yemen, Syria, Iraq and Libya,” he said at an inter-religious meeting at the UAE Founder’s Memorial.

“Let us commit ourselves against the logic of armed power,” he said in his first public address on the trip after meeting with Sheikh Ahmed al-Tayeb, the Grand Imam of Egypt’s Al-Azhar mosque who called on Muslims in the Middle East to embrace Christians.

UAE today was proud to host the historic meeting of His Holiness Pope Francis and His Eminence Dr. Ahmad Al Tayeb. We launched the 'Human Fraternity Award' to create a true interfaith dialogue. The two religious symbols were honoured during the award's first edition. pic.twitter.com/69MBNiXV7z

The United Nations is trying to implement a fragile ceasefire deal in the country’s main Hodeidah port, a lifeline for millions and the site of some of the war’s fiercest battles. It hopes the deal will pave the way for talks to end the war.

Francis used his regular Sunday address in Vatican City to urge all sides to implement the deal and help deliver aid.

A senior UAE official welcomed his comments on the peace deal: “Let us assure its implementation and make 2019 the year of peace in Yemen,” Minister of State for Foreign Affairs Anwar Gargash wrote on Twitter late on Sunday.

The Grand Imam, the most senior Muslim figure taking part in the visit, called on Muslims in the Middle East to “embrace” local Christian communities, describing them as part of the nation and not a minority.

“You are citizens with full rights and responsibilities,” said Sheikh Tayeb, whose Al-Azhar university represents one of one of the main seats of learning of Sunni Islam. He also called on Muslims in the West to integrate in their host nations and respect local laws.

Sheikh Tayeb and the Pope signed a document of “human fraternity” which carried a message against religious extremism. Earlier on Monday the Pope was welcomed to the sprawling Presidential Palace for private talks with Abu Dhabi’s Crown Prince Sheikh Mohammed bin Zayed al-Nahyan and other UAE leaders.

The visit received some positive media attention in neighbouring Saudi Arabia, home to Islam’s holiest sites and where churches are banned. The main English daily, Arab News, ran a picture of the pope and Abu Dhabi’s crown prince calling it “the moment that made history on the Arabian Peninsula.”

It ran an article citing Muslim and Catholic officials saying Saudi Arabia could feature in a future papal visit. Priests and diplomats describe the UAE as one of the least restrictive environments in the Gulf for Christian worship, which is allowed in church compounds with special licenses. But like other Gulf states it outlaws unsanctioned religious gatherings and non-Muslims must not proselytize.

Vatican officials say they hope one of the immediate effects of the visit will be permission to build more church compounds in the UAE to minister to the Catholic community.

On Tuesday before returning to Rome, the pope will celebrate an outdoor mass for some 135,000 Catholics in an Abu Dhabi sports stadium, an event with no precedent in the peninsula.

The UAE hosts nine Catholic churches and is home to about one million expatriate Catholics, many from the Philippines. Another one million Catholics are estimated to live in other countries in the Arabian Peninsula.