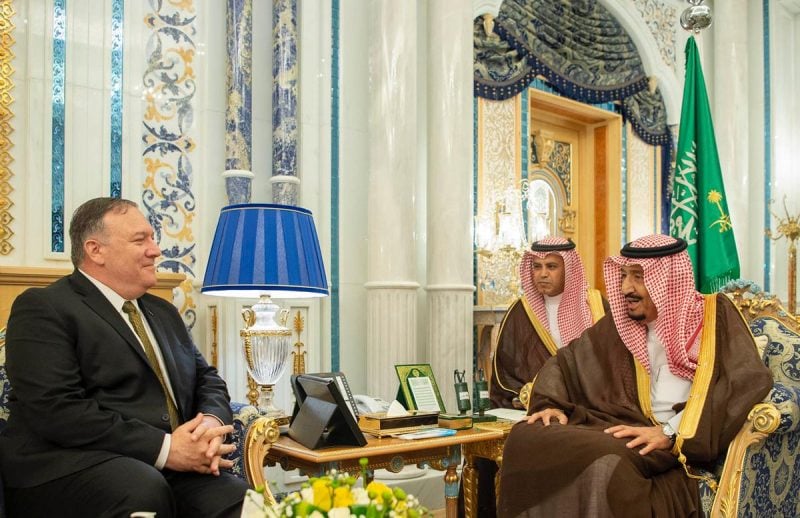 US Secretary of State Mike Pompeo arrived in Saudi Arabia on Monday amidst rising tensions with Iran.

Pompeo met with Saudi King Salman bin Abdulaziz Al Saud at Al-Salam Palace in Jeddah, where the two leaders reviewed the strategic relations between the two countries and the latest developments in the region, the official Saudi Press Agency (SPA) reported.

Following his Saudi visit, Pompeo is also scheduled to visit the UAE, where he will meet with Sheikh Mohamed bin Zayed, Crown Prince of Abu Dhabi.

Prior to leaving Washington for the trip, he told reporters that Saudi Arabia and the UAE were “two great allies in the challenge that Iran presents”.

“We’ll be talking with them about how to make sure that we are all strategically aligned and how we can build out a global coalition,” Pompeo said.

The visit comes even as tensions between the US and Iran have escalated in recent weeks.

Iran shot down an unmanned US drone last week, following which US media reported that the United States launched cyber attacks against Tehran.

US President Donald Trump said he had called off a retaliatory strike while bombers were in the air, deciding that too many people would die.

The confrontation between the two countries began last year when the US backed out from the nuclear agreement signed between Iran and world powers in 2015. Trump re-imposed sanctions on Tehran and persuaded all countries to stop buying Iranian oil.

In the past few weeks, the US blamed Iran for attacks on oil tankers off the UAE coast, although Tehran has denied the allegation.

Trump said on Sunday he was not seeking war with Iran and would be prepared to seek a deal.