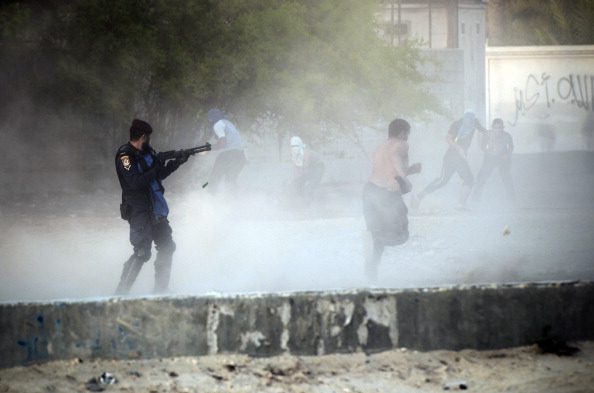 Bahraini police fired tear gas and birdshot at demonstrators on Wednesday, witnesses said, as protests called for by activists to press demands for democratic change in the U.S.-allied Gulf kingdom turned violent.

Activists have stepped up a two-and-a-half-year-old campaign to push the Sunni Muslim ruling family into allowing more democracy in the Shi’ite-majority state of 1.25 million people. Bahrain is an important U.S. regional ally against Shi’ite Iran.

Opposition figures had called in social media for mass rallies on Wednesday in Bahrain, prompting the authorities to tighten security and warn of tough measures and leading the United States to temporarily close its embassy.

There were no reports of serious injury in the clashes that erupted after sunset in a number of Shi’ite villages around the capital Manama.

In Shakhoora, a village west of the capital Manama, a standoff deteriorated into a clash between police on one side of a barbed wire fence they erected overnight and about 300 demonstrators chanting anti-government slogans on the other.

A Reuters witness said police charged the crowd, firing birdshot and tear gas. They said some people were overcome by tear gas but there were no reports of serious injury.

Witnesses said similar clashes occurred in other Shi’ite villages, including Karana where demonstrators responded by throwing firebombs at police, without causing casualties.

Earlier, a protest of some 100 people ended peacefully in the village of Saar west of Manama without police intervention.

The main opposition Al Wefaq Society said on its website that around 60 protest rallies were held in 40 locations on Wednesday. Reuters was not able to confirm that figure.

Security forces converged on the Manama district of al-Seef after activists used Twitter to encourage demonstrators to gather there, in defiance of a blanket ban on protests in the capital, although no incidents were reported.

The concerted new thrust for a “free and democratic Bahrain” through popular protest is being driven by “Tamarrod” (Rebellion), a loose association of opposition activists who coalesced in early July.

Tamarrod is named after the Egyptian movement that helped muster massive protests against President Mohamed Mursi and his Muslim Brotherhood before the military removed the country’s first freely-elected leader on July 3.

However, while the Egyptian protesters were backed by the military, Bahrain’s security forces remain loyal to a government that pledged on Monday to “forcefully confront” demonstrators and prosecute those responsible for “incitement”.

The Interior Ministry reported that an Asian worker was injured by a firebomb as he tried to open a road blocked by protesters in a village south of Manama, and said burning tyres had been used to bar a main road in Muharraq to the northeast.

It described the acts as “terrorism”, for which new laws passed this month allow tougher penalties including longer prison terms and the stripping of Bahraini nationality.

In some villages, all shops were closed on Wednesday. In Manama, businesses were open but there was a bigger police presence than usual. In the Bab al-Bahrain commercial district, police in riot gear sat in a parked bus. Security forces were also monitoring traffic on roads leading into the capital, occasionally stopping vehicles to check identity papers.

The Bahrain opposition complains of discrimination against majority Shi’ites in areas such as employment and public services, and is demanding a constitutional monarchy with a government chosen from within a democratically-elected parliament. The government denies any discrimination.

Bahrain, a tiny island state that hosts the U.S. Fifth Fleet as a bulwark for U.S.-aligned Gulf monarchies against Iran, has suffered bouts of unrest since February 2011 when a Shi’ite-led uprising demanded the al-Khalifa dynasty give up power.

The authorities crushed the revolt, one of a series of Arab Spring upheavals, but protests and clashes have persisted despite talks between government and opposition.

That has planted Bahrain on the front line of a tussle for regional influence between Iran and Sunni Saudi Arabia.

Wefaq’s leader told Reuters on Tuesday that it was not planning to join the protests officially but supported the right to peaceful demonstrations.

“I know that it is going to be a peaceful movement but, having said that, I also expect clashes between the government forces and the protesters, because they are against all protests and demonstrations,” Sheikh Ali Salman said.

At least 95 Egyptians were killed on Wednesday after security forces moved in on protesters seeking the reinstatement of Mursi, and the government imposed a state of emergency as unrest spread across the most populous Arab nation.