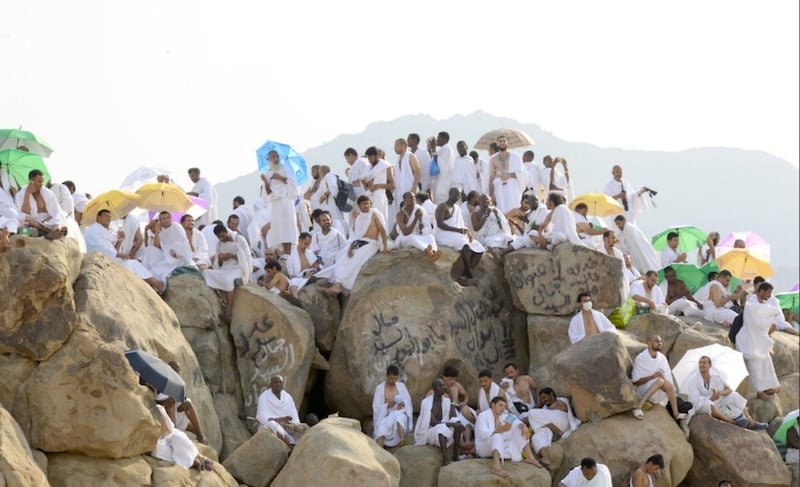 Two million Muslims gathered at Mount Arafat on Thursday for a vigil to atone for their sins and ask God’s forgiveness as the annual hajj pilgrimage reaches its climax.

Pilgrims clad in white robes spent the night in an encampment around the hill where Islam holds that God tested Abraham’s faith by commanding him to sacrifice his son Ismail and where the Prophet Mohammad gave his last sermon.

Other worshippers who had been praying in the nearby Mina area ascended in buses or on foot from before dawn as security forces directed traffic and helicopters hovered overhead.

Some pilgrims carved out seats on the craggy hillside, carrying umbrellas to protect themselves from the sun. Others filled nearby roads, with temperatures approaching 40 degrees Celsius (104 Fahrenheit). 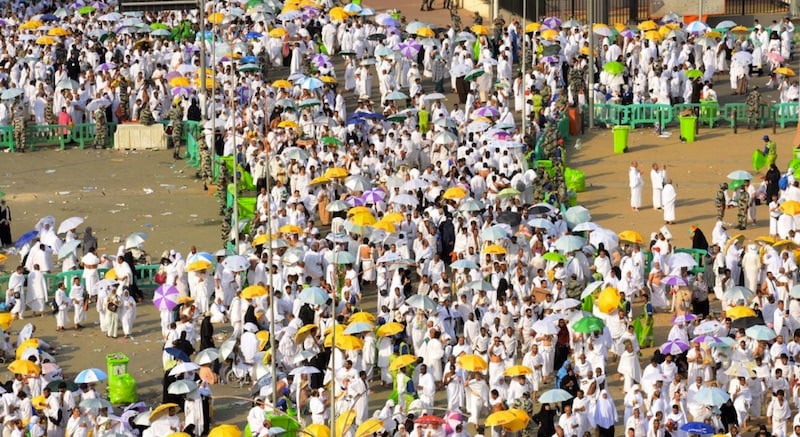 Men and women from nearly every country in the world gathered side by side, some crying on their neighbour’s shoulder.

An elderly Syrian pilgrim sitting on the hilltop shouted out, “Oh God, take revenge on the oppressors”. Others assembled around him responded, “Amen”.

Awfa Nejm, from a village near Homs, said: “We ask God to protect Syria and its people and return it to the way it was before.”

Twenty-seven-year-old Amin Mohammed from Nigeria said he was praying for peace in his country.

Saudi Arabia has said more than two million pilgrims, most of them from outside Saudi Arabia, have arrived for the five-day ritual, a religious duty once in a lifetime for every able-bodied Muslim who can afford the journey.

“Sharia came to preserve the security of nations and cultivate benevolence in (people’s) hearts,” he said, referring to the Islamic legal and moral code derived from the teachings of the Koran and the traditions of the Prophet.

He urged pilgrims to set aside politics during the hajj and come together with fellow Muslims.

“This is no place for partisan slogans or sectarian movements which have resulted in great massacres and the displacement of millions,” he said.

Still, violence in the Middle East, including wars in Syria, Iraq, Yemen and Libya, and other global hotspots are sure to be on the minds of many pilgrims, who will spend the rest of the day on Mount Arafat.

By sunset they will move to the rocky plain of Muzdalifa to gather pebbles to throw at stone columns symbolising the devil at another location called Jamarat on Friday, which marks the first day of Eid al-Adha (feast of sacrifice).

A crush in 2015 which killed hundreds occurred when two large groups of pilgrims arrived together at a crossroads in Mina, a few kilometres east of Mecca, on their way to Jamarat. It was the worst disaster to strike hajj for at least 25 years.

Officials say they have taken all necessary precautions this year, with more than 100,000 members of the security forces and 30,000 health workers on hand to maintain safety and provide first aid.

Saudi state television on Thursday showed a new kiswa, the cloth embroidered with verses from the Koran, being placed over the Kaaba in Makkah’s Grand Mosque. Pilgrims will return to pray there at the end of hajj.