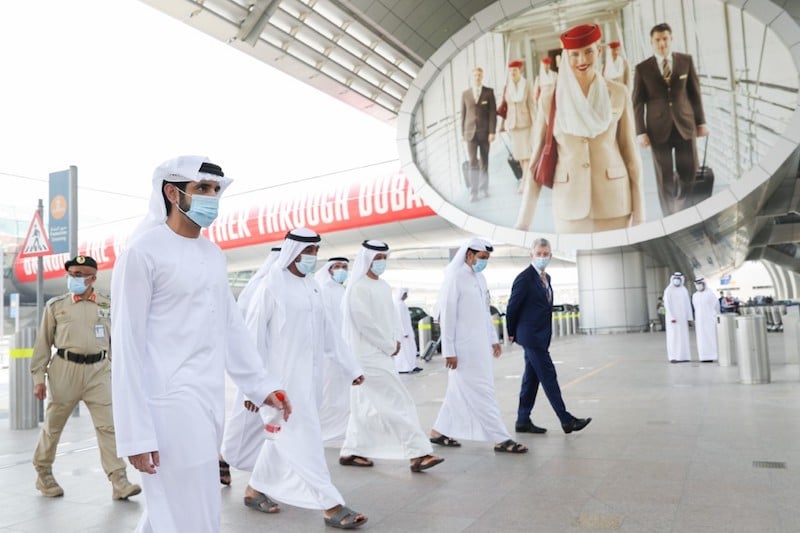 “I have reviewed the procedures and protocols in place to welcome tourists back to Dubai. What we have seen clearly demonstrates Dubai’s comprehensive preparedness to welcome the world once again and resume international tourism,” news agency WAM reported Sheikh Hamdan as saying on his visit to DXB.

“We have implemented the highest international safety standards to ensure the wellbeing of travellers and tourists.”

In a video posted on his Twitter account and images shared by WAM, he can be seen touring different facilities across the airport including immigration desks, the baggage screening posts, the concourse and testing areas within the airport.

Today I oversaw preparations at @DXB as Dubai began welcoming international tourists. I also observed the various precautionary measures in place to ensure the health and safety of all travelers and the community. pic.twitter.com/mqMNkGSOSh

Earlier this month, the World Travel and Tourism Council Dubai gave Dubai the Safe Travels Stamp which validates that it meets global health and hygiene protocols, and has taken effective measures to ensure the health and safety of travellers and tourists.

He reviewed the operational procedures especially at the arrivals terminal and met with senior officials and teams, thanking them for their efforts to ensure the airport’s readiness to welcome visitors from around the world.

“Today, we are sending a message of hope to the world and beginning a fresh drive to create new success stories inspired by the vision of His Highness Sheikh Mohammed bin Rashid Al Maktoum, Vice President, Prime Minister and Ruler of Dubai,” said Sheikh Hamdan.

In 2019, DXB remained the world’s number one airport for international passengers for the sixth consecutive year by welcoming a total of 86,396,757 passengers.

“For many years, DXB has ranked 1st as the world’s busiest hub for international passenger traffic. With our teams’ outstanding efforts, we will retain this ranking. We strongly believe in our ability to reinforce Dubai’s outstanding position in global travel and tourism,” tweeted Sheikh Hamdan on Tuesday.