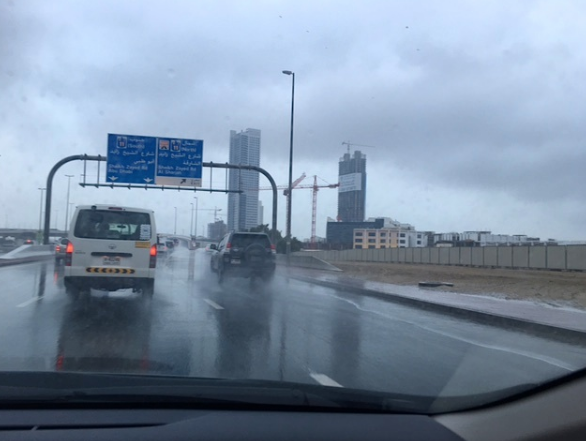 The United Arab Emirates is expected to see cloudy weather on Sunday with scattered rainfall across the country, the National Centre of Meteorology and Seismology has said.

People in Dubai woke up to an overcast sky with moderate rainfall.

In its bulletin for the day, NCMS predicted that the weather might also get “thundery at times especially northwards”.

A significant fall in temperatures is expected, it added.

Temperatures will range from 21 degree celsius to 14 degrees in coastal areas, between 23 to 12 degrees in internal regions and will fluctuate between highs of 18 degrees and lows of six degrees in mountainous parts.

“Fresh northwesterly winds will prevail in general, becoming strong over the sea. Sea is rough to very rough in the Arabian Gulf, and moderate to rough in Oman Sea,” the bulletin said.

The UAE is also anticipated to see partly cloudy and windy weather on Monday with a further reduction in temperatures.

Winds are predicted to be strong at times over the sea, causing rising dust over exposed areas. “Sea will be very rough to rough in the Arabian Gulf and rough to moderate in Oman Sea,” NCMS said.

The dull climate will continue into Tuesday, with partly cloudy weather and moderate to fresh winds, especially over the sea.

While the sea will be rough in the Arabian Gulf, it will remain moderate in Oman Sea, NCMS stated.