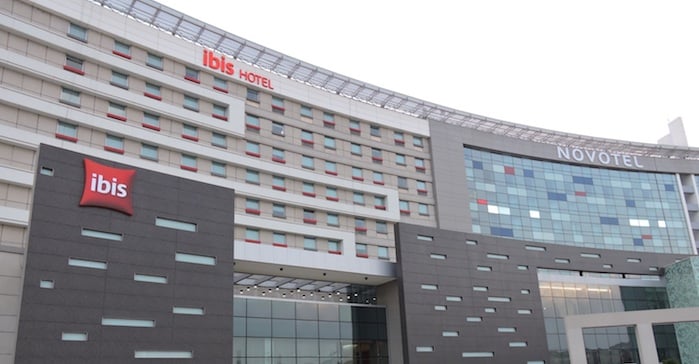 French hotel group Accor will become the first foreign hotel operator to re-enter Tehran in October when it opens a dual-branded property next to Imam Khomeini International Airport.

The Axis hotel has been rebranded ibis IKIA (196 rooms) and Novotel IKIA (296 rooms) – a footbridge directly links both hotels to the terminal – and a ceremony was held in a packed ballroom on Tuesday to announce Accor’s arrival, ahead of a widely expected business travel boom once sanctions are lifted.

Accor is set to become the first international hospitality company to operate in the market since the 1979 Revolution.

Aria Ziggurat’s chairman Dr Mehdi Jahangiri hailed a “historic day” and it was hard to disagree, as the city looks to add anything up to 300 more hotels in post-sanctions Iran. Only a fifth of existing hotels are in the four- and five-star categories and the country is also targeting leisure travellers with its abundant heritage sites.

Bazin said the deal moved “very quickly” in July and signed on the dotted line after gaining permission from the French government. “Being first is fine but it’s not enough – what matters the most is we remain the leader over the next five years,” he said. “Sofitel and Pullman, of course, can be here but likely to be in a four or five cities.”

He cited Iran, sub-Saharan Africa and India as huge growth markets. For any mature economy, he said GDP from tourism is between 7-12 per cent “but here it is less than half a per cent”.

While the out-of-town location won’t appeal to everyone, Bazin believes the convenience aspect will appeal to passengers who can avail of on-site MICE facilities, and won’t be subjected to the city’s notorious congestion. Intra-Tehran business will also be a core focus.

The airport is also gearing up for growth, planning to add two terminals which will increase capacity beyond 20 million passengers annually.