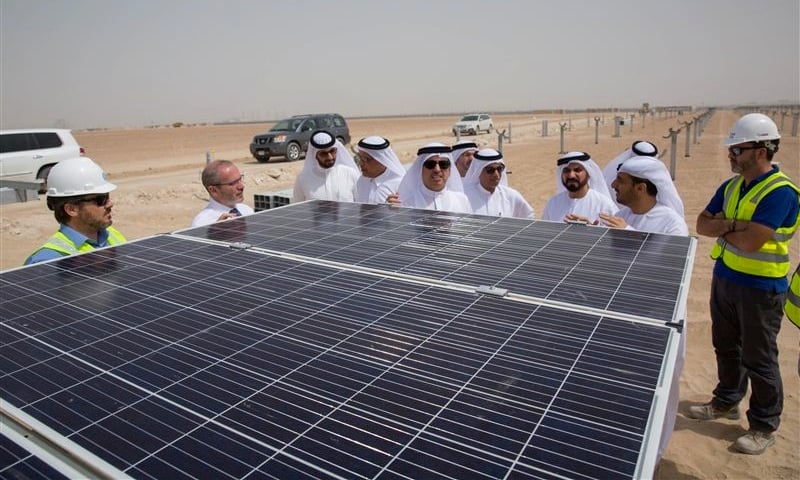 The third phase of the massive Mohammed bin Rashid Al Maktoum Solar Park in Dubai is progressing on track to be fully complete by 2020, according to the Dubai Electricity and Water Authority (DEWA).

The announcement comes after DEWA managing director and CEO Saeed Mohammed Al Tayer conducted a field visit to the site.

The 800MW third phase of the park is being developed by Shuaa Energy 2 – a joint venture established between DEWA (with a 60 per cent stake) and a Masdar-led consortium which also includes Electricite de France (EDF)’s subsidiary EDF Energies Nouvelles (with a 40 per cent stake).

The consortium managed to close the financing for the third phase in June with seven different institutions, with the project becoming the largest in the Middle East to receive Sharia-compliant financing.

An international consortium led by Spanish renewable energy contractor GranSolar from Spain won the contract for engineering, procurement, and construction (EPC) early this year, and so far 22 per cent progress has been made on the project, DEWA said.

The third phase will be completed in three stages over 16 square kilometres. The first 200MW stage is expected to be operational in the first half of 2018.

Al Tayer stressed the need to “maintain the highest standards of security, health and safety, and to adhere to the project’s contractual schedule”.

When completed, it is expected to save approximately 6.5 million tonnes per annum in emissions, according to DEWA.

The park will also be connected to the World Expo site, and provide it with 400MW of power.