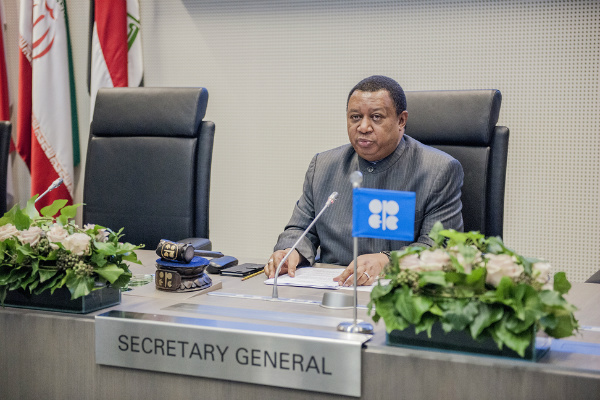 OPEC said on Tuesday oil inventories have risen despite a global deal to cut supply and raised its forecast of production in 2017 from outside the group, suggesting complications in an effort to clear a glut and support prices.

In a monthly report, OPEC also said its biggest producer Saudi Arabia increased output in February by 263,000 barrels per day to 10 million bpd, after in January making a larger cut than required by the OPEC accord to ensure strong initial compliance.

The Organization of the Petroleum Exporting Countries is curbing its output by about 1.2 million barrels per day (bpd) from January 1, the first reduction in eight years. Russia and 10 other non-OPEC producers agreed to cut half as much.

OPEC said in the report oil stocks in industrialised nations rose in January to stand 278 million barrels above the five-year average, of which the surplus in crude was 209 million barrels and the rest refined products.

“Despite the supply adjustment, stocks have continued to rise, not just in the US, but also in Europe,” OPEC said.

“Nevertheless, prices have undoubtedly been provided a floor by the production accords.”

Oil prices fell after the release of the report to trade close to $50 a barrel, their lowest since November. Crude is still up from about $40 a barrel a year ago and a 12-year low near $27 reached in January 2016.

In the report, OPEC pointed to an increase in its members’ compliance with the deal, according to figures from secondary sources that OPEC uses to monitor output.

Supply from the 11 OPEC members with production targets under the accord – all except Libya and Nigeria – fell to 29.681 million bpd last month, according to these figures.

That means OPEC has complied by more than 100 percent with its plan to lower output for those nations to 29.804 million bpd, according to a Reuters calculation. OPEC gave no compliance figure in the report.

But the report revised up its estimate of oil supply from producers outside OPEC this year, as higher oil prices following the supply cut help spur a revival in US shale drilling.

OPEC said its production, including Nigeria and Libya, fell by 140,000 bpd in February to 31.96 million bpd, led by a large Saudi cut.

While the OPEC secondary sources said Saudi output fell in February to 9.797 million bpd, Saudi Arabia reported to OPEC that it increased to 10.011 million bpd – which would still be in line with its OPEC output target.

OPEC uses the two sets of data to monitor output – figures provided by each country and by secondary sources, which include industry media. This is a legacy of old disputes over real production levels.

Production levels reported to OPEC by other members in February including Algeria, Iraq, the United Arab Emirates and Venezuela were also higher than estimated by the secondary sources.

OPEC maintains that stockpiles will begin to fall thanks to the supply cut, saying that in the second half of the year “the market is expected to start balancing or even see the start of a drawdown in oil inventories.”

The report revised upward its forecast for world oil demand in 2017 and said the requirement for OPEC crude would average 32.35 million bpd – more than current production, suggesting stocks will drop if output does not rise.