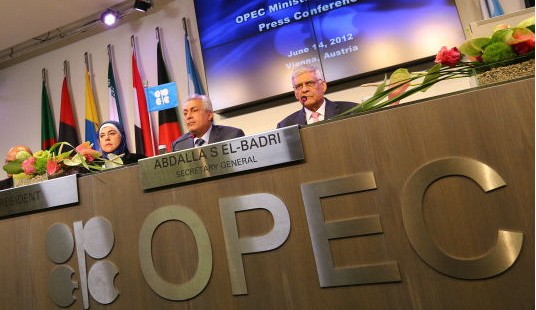 OPEC’s oil output has fallen below 30 million barrels per day for the first time in two years in October, a Reuters survey found, as near-record Saudi Arabian output fails to offset disruption in Libya and lower supply from Iran and Nigeria.

Supply from the Organization of the Petroleum Exporting Countries has averaged 29.90 million barrels per day (bpd), down from a revised 30.01 million bpd in September, according to the survey based on shipping data and information from sources at oil companies, OPEC and consultants.

The survey further illustrates the drag on OPEC output from problems in African producers and sanctions on Iran. But rising shale oil supply from the United States has limited the outages’ impact on prices, which at $109 a barrel are down over $8 from their 2013 peak.

“The Atlantic Basin continues to be driven by the increase in U.S. production. If we did not have the increased supplies from the U.S., the lower OPEC production would have had a greater impact,” said Olivier Jakob, an analyst at Petromatrix.

In October, renewed protests in Libya, plus disruption in Nigeria and a drop in Iranian sales outweighed a partial recovery in southern Iraqi exports and a third month of Saudi output at around 10 million bpd.

OPEC’s October output is the lowest since October 2011, when the group pumped 29.81 million bpd according to Reuters surveys, and leaves supply below OPEC’s nominal target of 30 million bpd for the first time since it came into effect in January 2012.

The biggest fall in supply was in Libya, where protests at oilfields and terminals again limited supplies. Output averaged 410,000 bpd during October and by the end of the month was below 300,000 bpd, according to the survey.

Libya is a long way away from bringing output back to 1.4 million bpd, the production rate earlier this year.

Iranian supply to market was estimated at 2.61 million bpd, down 90,000 bpd as less crude headed to China and India. U.S. and European sanctions on Iran continue to restrain exports, despite a thaw in relations with the West from Iran’s apparent willingness to compromise on its nuclear work.

In Nigeria, where output has been increasingly hit by spills and theft from pipelines, supply declined as Royal Dutch Shell again had to close the Trans Niger pipeline and warn it might miss shipments of Bonny Light crude.

Saudi Arabia, industry sources say, has kept output around 10 million bpd for the last three months. Supply edged lower in October due to a reduced requirement for crude to fuel domestic power plants, the survey found.

The kingdom lifted output to 10.05 million bpd in August, the highest since records began in 1980, according to figures from the U.S. Energy Information Administration.

Iraq boosted oil exports in October due to a reduced impact from infrastructure work at its southern terminals. Exports from the south averaged 1.96 million bpd in October, according to shipping data, up from September’s 1.82 million bpd.

But lower shipments of Kirkuk crude – due to bomb attacks on the pipeline to Turkey and a dispute with the Kurdistan Regional Government – limited the rise in exports overall.