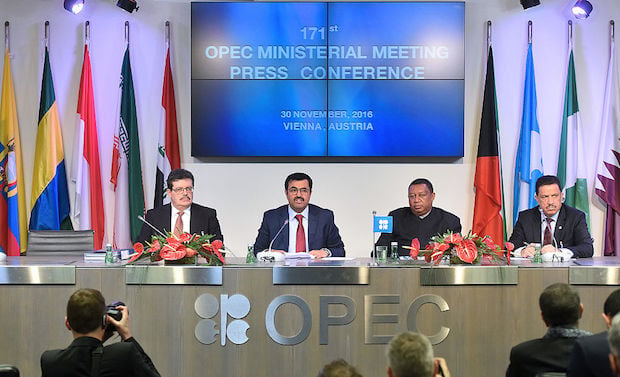 OPEC will achieve some but not all of the production cuts the organisation agreed last month, according to an informal survey of energy professionals conducted after the agreement was announced.

Most energy professionals expect OPEC output will decline to around 33.0 million barrels per day in January 2017, down from 33.6 million bpd in October but well above the deal’s target of 32.5 million bpd.

Most of the 260 respondents to the survey think the organisation will succeed in cutting output, but on average by only 600,000 bpd, or half its stated target of 1.2 million bpd.

Less than 8 percent thought OPEC would achieve its target in full. More than twice as many thought output would stay the same or rise.

Scepticism about OPEC’s ability to meet its target underlines the challenge facing the organisation as it tries to reduce global oil stocks and raise prices next year.

Saudi Arabia and its allies Kuwait, Qatar and the United Arab Emirates have pledged to cut their combined production by almost 790,000 bpd with effect from January.

Cuts by these members will probably be delivered in full, or almost, given their track record of complying with past output agreements.

But the current deal assumes cuts of around 380,000 bpd from other members of OPEC, most of which have a poor track record of compliance and are unlikely to deliver them in full.

In addition, Nigeria and Libya were specifically exempted from output ceilings imposed on other members of OPEC to allow them to increase production if they can restore security at their oil facilities.

Most OPEC members actually raised production last month, even as they talked about reducing it from January, as they tried to defend market shares and establish the highest possible baseline for future cuts.

The short-term boost in production has worsened the supply situation, increased stockpiles, and made the eventual process of rebalancing harder.

If OPEC members can deliver some sort of production cut, even one of only 600,000 bpd, it will help bring rebalancing forward, but the process is still likely to be a long and difficult one.

OPEC needs strong growth in oil consumption next year to absorb cheating by the organisation’s members, as well as a possible increase in exports from Nigeria and Libya, and a potential rise in US shale production.