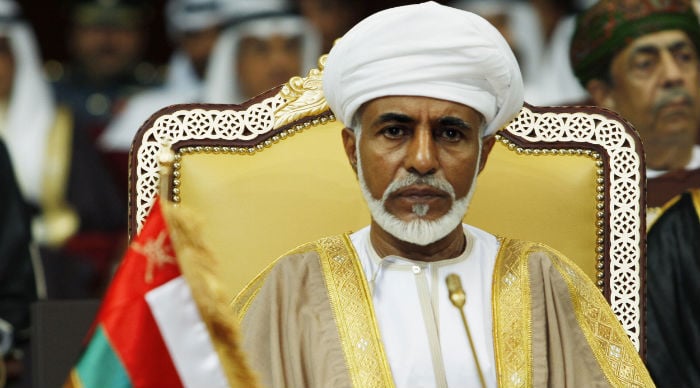 On a cold, hazy morning in the desert outside the northern town of Bahla last week, Oman’s ruler told a group of local people that he had ordered the creation of a fund to help them establish small businesses.

Flanked by two bodyguards, the 72-year old Sultan Qaboos bin Said, dressed in simple, traditional robes, sat on a wooden bench discussing economic policy with a group of about 300 people sitting a few metres away from him.

“This fund will help young men and women with their projects. The initial capital of the fund has been set at OMR70 million ($182 million), which will be increased by OMR7 million each year,” Sultan Qaboos said.

Oman is approaching economic crossroads, and the sultan’s visit to Bahla was a sign of that.

The economy is booming on the back of high oil prices, but it has struggled to create enough jobs for a young and growing population, and the state’s oil production may start declining later this decade as Oman’s reserves – not as lavish as those of neighbouring Saudi Arabia and Abu Dhabi – are used up.

The solution, government officials say, is to develop a strong non-oil sector of the economy based on private companies that will employ Omani job-seekers. But an entrepreneurial economy would be a major change for Omanis, who have grown accustomed to relying on oil wealth and comfortable jobs in the government or state-linked enterprises.

So Sultan Qaboos, who has ruled Oman for over four decades, is taking his economic strategy directly to the people. He has revived a custom of travelling on month-long tours around the country, holding “consultation sessions” with local people in the desert behind the royal camp, which consists of traditional nomadic tents – a contrast to his opulent palace in Muscat.

The sultan conducted such national tours annually for over two decades but suspended them in 2011. This year’s tour is focusing heavily on the economy.

Sultan Qaboos is using the tour to describe the government’s efforts to boost employment and encourage people to get involved in setting up small and medium-sized enterprises (SMEs). At last week’s meeting in Bahla, he ordered that new owners of SMEs be given state land for free, so that they would start with a “more competitive edge”.

“The land will be for long-term utilisation, and we pray to Allah that our young men and women show interest in various business fields,” he said.

The International Monetary Fund estimates unemployment among Omani citizens may have exceeded 20 per cent in 2010. Government officials say that estimate was far too high and that the number of registered unemployed was reduced by three-quarters to about 17,000 last year.

Finance minister Darwish al-Balushi told reporters last month that government spending had created 36,000 jobs for Omanis in 2012 and that a further 56,000 would be created this year, of which 20,000 would be in the civil service.

But room for the government to support ever-bigger jobs programmes is decreasing. Balushi said that because of spending rises, the oil price which the government would need to balance its budget had risen to $104 per barrel in 2013 – not far from Brent crude’s current levels around $115.

“The sooner that SMEs are created, the better for the economy. I don’t think we can sustain the surplus situation for too long,” said Abdulwahid Al Heraki, an independent economist.

And in the long term, Oman will bump up against the limits of its oil reserves. British oil firm BP has estimated the reserves will run out in 17 years if the country does not raise output from current levels; difficult geology means any output boost could be prohibitively expensive.

“The SME fund is a smart move as it will lead to self-employment, which in turn will lessen the burden of creating jobs,” said Ahmed Saleem, a job consultant at Capital Manpower Co. “I don’t think in the long run the government can afford to pay the salaries of all these new workers.”

Oman’s jobs situation is complicated by the reliance of its economy on foreign workers, many from south and southeast Asia. Around 1.3 million of the population of about 3.3 million are foreigners, most of them workers brought in to do skilled or strenuous jobs in the oil, construction and services industries.

Sultan Qaboos has faced questions from the public during his tour over whether foreigners are taking jobs and wealth from Omanis. At times he has seemed to sympathise with that concern; last week he said he was worried about the repatriation of money by expatriates to their homelands.

“Billions of rials are transferred each year. The government and all segments of society should carry out their duties to put an end to this hidden trade,” he said. “The hidden trade causes great damage to the Omani economy. It decreases the available suitable job opportunities for our sons and daughters.”

Last month the government asked its departments to check that foreigners were not being hired illegally, and to assess which sectors should be the focus of efforts to employ Omani nationals.

The government knows, however, that it needs foreign workers to develop the big industrial and infrastructure projects required to diversify the economy – for example, industrial facilities in the central town of Duqm, and a national railroad that could make Oman a hub for regional merchandise trade.

So while he acknowledges the public’s concerns, Sultan Qaboos has sought to justify the employment of foreigners.

“The ratio we considered was always between 30 to 33 per cent of the population. At present, expatriate numbers have increased greatly, but in some aspects they are temporarily justified, such as for some major projects in Duqm and the upcoming railway project,” he said.

When he turns his public consultations to the subject of Omanis setting up their own small businesses, however, the sultan seems to strike a chord with many people.

“It is a good initiative by the sultan. I am looking to set up a car repair workshop and I need capital to do it. The financial grant will make me my own boss,” 26-year old mechanic Khalid Al Mukhaini said in Muscat.