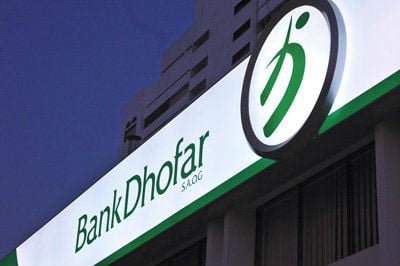 Bank Dhofar has proposed a preliminary share swap ratio and completed a study for its possible merger with Bank Sohar, the latter said in a statement on Monday.

It is the latest incremental step towards merging the two lenders since Bank Dhofar, the sultanate’s second largest bank by market value, first approached its smaller rival about a possible tie-up in July last year.

“Bank Sohar announces that it has received a letter from Bank Dhofar, advising the completion of the preliminary study by an external party,” Bank Sohar said in a bourse filing.

“Bank Dhofar has proposed a preliminary swap ratio, which will be subject to the completion of a due diligence exercise and obtaining necessary approvals,” it said, adding that the board of Bank Sohar would now discuss the letter. It did not reveal the proposed ratio.

A merger between the two banks would create Oman’s second biggest bank by asset value, with assets worth around 4.78 billion rials ($12.42 billion), according to first-quarter financial statements.

On the whole though, bank mergers are rare – both in Oman and the wider Gulf – as main shareholders, who are often prominent merchant families, are reluctant to cede control except for vastly inflated valuations