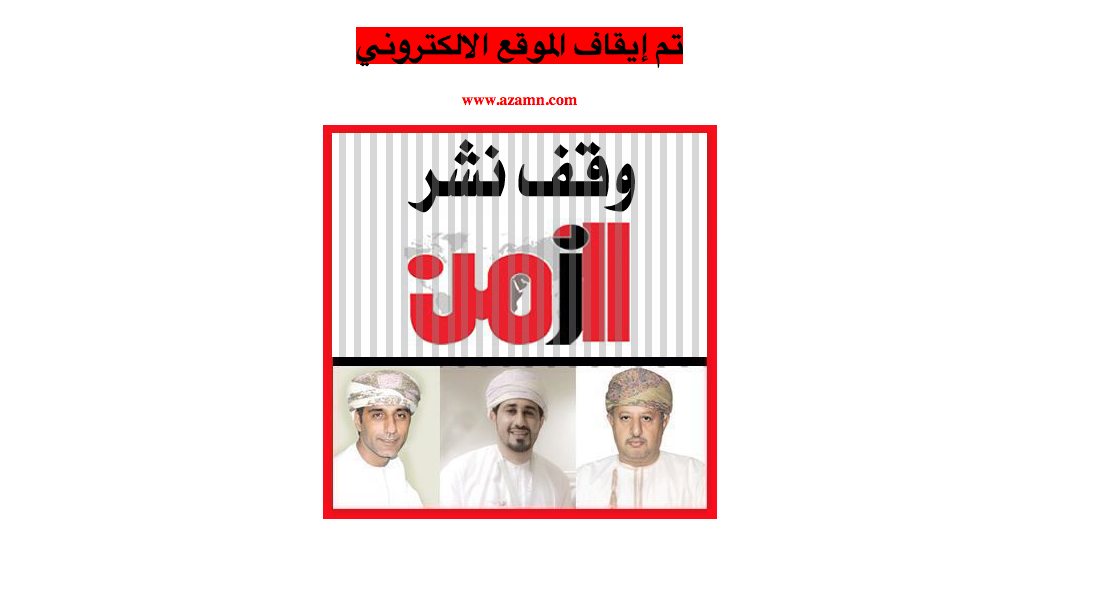 Oman has suspended a privately owned newspaper from publishing after it published articles alleging corruption in the country’s judiciary.

The website of daily newspaper Azamn now displays a holding screen following a statement published by state news agency ONA on Tuesday that the government had “taken measures” against a paper without naming it, according to reports.

Yesterday, Amnesty International said three journalists from Azamn had been detained in connection with an article published on July 26.

“The most recent arrest of the deputy editor in chief, Youssef al-Haj, took place yesterday. Shortly afterwards, Oman’s Ministry of Information ordered the shutdown of the newspaper and its online news site,” according to the organisation.

Amnesty claimed that local authorities had carried out a “string of journalist arrests in recent weeks signalling a growing crackdown on freedom of expression in the country”.

The deputy director of the organisation’s Middle East and North Africa Programme said that journalists from the publication were being punished for carrying out legitimate journalistic work.

Magdalena Mughrabi said the three had committed no crime and should be immediately released.

The July 26 article accused the head of Oman’s Supreme Court and the chairman of the Judicial Council of intervening in the outcome of verdicts on behalf of influential officials, according to the organisation.

The country’s Ministry of Information warned that the publication could be shut down if it continued to report on corruption allegations following the first arrest.

After Zaher Al Abri was detained, Azamn’s deputy editor in chief Yousef Al-Haj published a series of articles based on interviews with the vice president of Oman’s Supreme Court Ali al-No’mani reportedly confirming allegations of corruption made in the previous article.

Yousef Al-Haj was arrested following the latest of these published on August 9, Amnesty said.

Oman’s state news agency published a statement describing the articles as “a flagrant violation of the limits and ethics of freedom of expression” and warned that the articles were damaging to one of the country’s most important institutions.