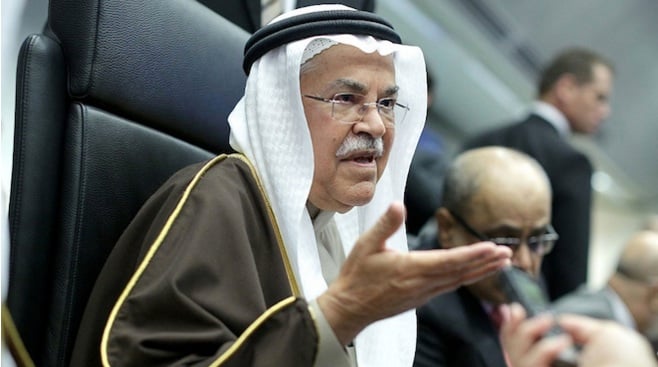 Oil futures traded lower on Wednesday on concerns that a producer meeting, planned for Sunday in Doha to discuss freezing output, will do little to trim oversupply and a strengthening dollar.

Comments by Saudi oil minister Ali al-Naimi in the al-Hayat newspaper in which he confirmed his country’s position that an outright production cut was out of the question weighed on prices, traders said.

“Forget about this topic,” al-Naimi told the paper, when asked about any possible reduction in his country’s crude output.

Iranian oil minister Bijan Zanganeh does not plan to attend the Doha meeting but Iran will be sending a representative, an Iranian journalist from the Seda weekly wrote on his twitter account on Wednesday. Iran has already said it does not plan to participate in the freeze agreement as it seeks to boost its production in the post-sanctions era.

“We believe that any agreement to freeze output which excludes Iran would largely be an acknowledgement of existing conditions at the main participants,” UBS said in a note on Wednesday.

But Morgan Stanley said the market may still be underestimating the potential near-term headline upside risk of the Sunday meeting.

“A deal not only seems likely – as leaks and prior announcements have suggested – but confirmation of the deal, greater clarity about the freeze or hints of further OPEC action could reinforce the bullish sentiment,” the bank said on Wednesday.

Official inventory data from the Energy Information Administration (EIA) is due later on Wednesday.

Some signs of improving crude demand have appeared as China’s crude imports, buoyed by strong demand from independent refiners and better refining margins, rose 13.4 percent in the first quarter from a year ago, customs data showed on Wednesday.