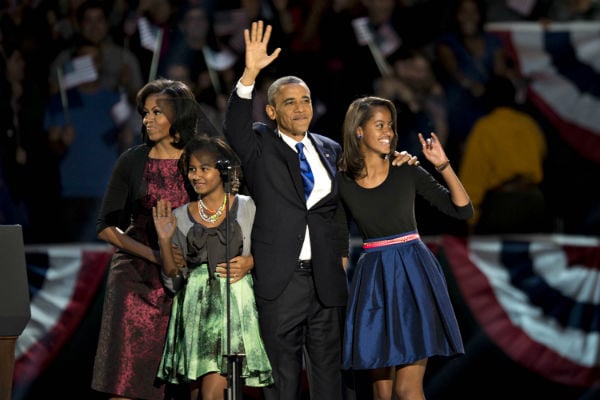 After officially winning the US election, President Barack Obama has addressed his supporters, campaign staff and volunters at the Obama campaign headquarters in Chicago.

The President walked out to Stevie Wonder’s ‘Signed, Sealed, Delivered’ alongside his wife and the US’s First Lady Michelle Obama, and their children Sasha and Malia, as the crowd took to its feet chanting “four more years”.

Obama thanked everyone who campaigned and who voted for both parties and acknowledged the long queues outside many polling stations across the country, commenting: “By the way we have to fix that.”

Addressing the crowd, Obama said: “Tonight… the task of perfecting our union moves forward. It moves forward because of you. We are an American family that rises or falls as one nation. Thank you for believing all the way. You lifted me up the whole way and I will always be grateful.”

The President then made a special thank you to his vice-president Joe Biden, who he described as ‘the happy warrior’. He also paid tribute to his wife and daughters and called his campaign team and volunteers the ‘best ever in the history of politics’.

America’s 44th President said: “Democracy can be messy. We each have our own deeply held beliefs. That won’t change after tonight, and it shouldn’t. When we make big decisions as a country it necessarily stirs up controversy. Despite all our differences most of us share the same hopes for our country’s future.”

Obama then thanked everyone who voted, recognising the democratic right that America holds dear and reminding his audience that nations around the world are fighting for ‘their chance to argue’.

“We believe in a generous America, in a compassionate America, in a tolerant America,” Obama told the crowd who cheered and waved flags of the stars and stripes every time he paused.

“That’s where we need to go – forward. Progress will come in fits and starts, it’s not always a straight path.

“I return to the White House more determined and more inspired than ever. Tonight you voted for action, not politics as usual.”

Obama pledged to reach out to Republicans and work on problems between politicians which America has grown tiresome of, echoing his Republican challenger Mitt Romney’s comments in his concession speech earlier.

“Despite all the hardship we’ve been though, I’ve never been more hopeful about our future, and I ask you to sustain that hope,” Obama continued, in a speech that lasted almost 25 minutes.

“I believe we can seize this future together because we are not as divided as our politics suggest. We will continue our journey forward.”

The crowd then erupted as cannons fired confetti all around the stage as the President’s wife and children joined him. Vice president Joe Biden also appeared and warmly embraced Obama amid the rapturous applause.