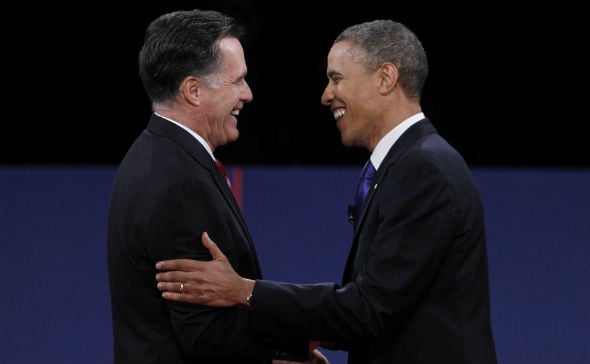 President Barack Obama repeatedly attacked Republican challenger Mitt Romney on foreign policy on Monday in their third and final debate in an effort to blunt his opponent’s surge in the polls with two weeks left until Election Day.

The high-stakes debate strayed frequently into domestic policy, with Romney seeking to bolster his argument that Obama had bungled the U.S. economic recovery with high unemployment and rising debt.

Neither man threw a knockout punch or made a noticeable gaffe in the 90-minute encounter at Lynn University in Boca Raton, although Obama scored enough debating points to be declared the winner in the first surveys.

A CBS News snap poll declared 53 per cent believed Obama won, versus 23 per cent for Romney and 24 per cent saying it was a draw. A CNN poll put Obama as the winner by 48 per cent to 40 per cent.

With foreign policy a low priority in a campaign focused mostly on the economy, it was unclear what impact the debate would have on the race, which enters the final frenzy of campaigning with both men tied in the polls before the November 6 election.

Respondents in the CNN poll were split over whether the debate would influence their votes.

The debate was one last chance for the candidates to appeal to millions of voters watching on television and Obama was the aggressor from start to finish.

He criticized the Republican for lacking ideas on the Middle East, mocked his calls for more ships in the U.S. military and accused Romney of wanting to bring the United States back to a long-abandoned Cold War stance.

Obama had a biting, perhaps condescending, response when Romney said the U.S. Navy had fewer ships now than at any time since 1917.

“Governor, we also have fewer horses and bayonets,” Obama said, suggesting that Romney’s worldview was obsolete. “We have these things called aircraft carriers, where planes land on them. We have these ships that go underwater, nuclear submarines.”

Obama also said the Republican presidential candidate was seeking to turn back the clock by once declaring Russia the top “geopolitical foe” of the United States.

Seated at a table with moderator Bob Schieffer, Obama said Romney was trying to return U.S. foreign policy to the 1980s and that the decade was “now calling to ask for their foreign policy back because, you know, the Cold War’s been over for 20 years.”

Romney said Obama’s policies toward the Middle East and North Africa were not stopping a resurgence of the threat from al Qaeda in the region.

Romney, wanting to make no mistakes that could blunt his recent rise in the polls, did not take the bait on some occasions when attacked, which may have led viewers to declare Obama the winner.

Although Romney lacks foreign policy experience, his aides said they believed their man’s performance allowed him to pass the “commander-in-chief” test to show Americans he is knowledgeable about foreign affairs and enable them to envision him in the Oval Office.

Romney accused Obama of failing ally Israel, which the Democrat has not visited since taking office four years ago.

The former Massachusetts governor, whose central theme throughout the campaign has been a promise to rebuild the weak U.S. economy, frequently turned the discussion back to economic matters, saying U.S. national security depended on a strong economy.

“The president hasn’t balanced a budget yet. I expect to have the opportunity to do so myself,” said Romney.