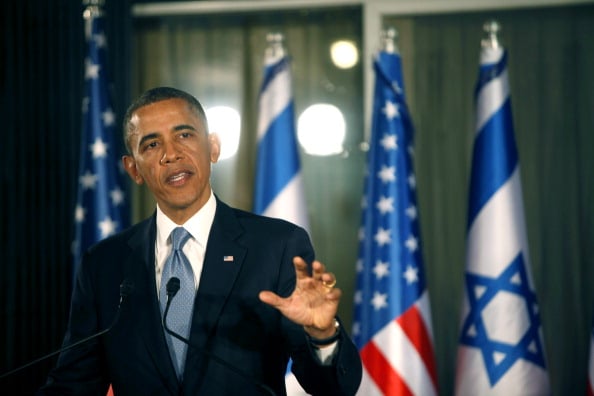 Obama came to Israel seeking to allay the security fears of Washington’s closest ally in the Middle East, burnish his image with Israelis and repair frayed relations with Prime Minister Benjamin Netanyahu over Iran and the expansion of Jewish settlements on occupied land Palestinians claim for a state.

Two months into his second and final term, the president tried to make a positive impression at the start of a visit high on symbolism but low on expectations of any breakthrough in Israeli-Palestinian peace efforts stalled since 2010.

At Tel Aviv airport, he visited an Iron Dome anti-missile battery, a partly U.S.-funded system Israel has deployed against rockets from Gaza and Lebanon. He seemed at ease with Netanyahu, a right-winger who is also recently re-elected and has just this week formed a new governing coalition.

At a joint news conference after three hours of talks, Obama offered unstinting verbal support for Israel. He used what appeared to be his toughest language to date on what may happen should Syrian President Bashar al-Assad use chemical weapons.

After both sides in Syria’s civil war accused the other of a chemical attack on Tuesday – while providing no evidence to international bodies – Obama said he had asked for an investigation to determine if “this red line” had been crossed.

Voicing doubts that Syrian rebels could have pulled off such an attack, he said: “Once we’ve established the facts I have made clear the use of chemical weapons is a game changer.”

Obama, who has previously said chemical weapons were be a “red line” that would trigger unspecified US action, has been loath to attack Syria after spending much of his first term winding down wars in other Muslim states, Iraq and Afghanistan.

He said on Wednesday that Syrian forces would be committing a “tragic mistake” in resorting to unconventional arms or making them available to others: “The Assad regime must understand that they will be held accountable for the use of chemical weapons or their transfer to terrorists,” Obama said, without elaborating.

The body language between Obama and Netanyahu appeared noticeably warmer than in their past encounters and the Israeli prime minister was at pains to avoid antagonising his guest.

Last year, Netanyahu seemed to prefer Obama’s opponent in the 2012 presidential election, Mitt Romney, only to see the Republican fail to unseat Obama.

While both leaders said that Iran remains a global threat because of its nuclear programme, there seemed little doubt that Netanyahu is prepared to part ways with Obama on the issue of Iran if necessary.

He insisted Israel had a right to defend itself against Iran’s alleged nuclear weapons development, despite Obama’s counselling of patience to let sanctions and diplomatic pressure continue to work. Iran denies it wants to make such weapons.

Netanyahu said he was certain Obama appreciated that Israel “can never cede the right to defend ourselves to others, even to the greatest of our friends”, a hint at a possible go-it-alone plan to attack Iran: “Today we have both the right and the capability to defend ourselves,” said Netanyahu.

But he also voiced confidence in Obama, saying: “I am absolutely convinced that the president is determined to prevent Iran from getting nuclear weapons. And I appreciate that.”

Obama, whose administration has in the past privately sought to head off a unilateral Israeli military strike against Iran, said Netanyahu was “absolutely correct” that each country had a right to defend itself and that there was “not a lot of daylight” between U.S. and Israeli assessments of where Iran is on its nuclear development.

But he was quick to note “there is time to resolve this diplomatically”.

“The question is, will the Iranian leadership seize that opportunity,” Obama added.

Despite his assurances, Obama faces strong doubts among Israelis over his promise to prevent Iran from obtaining a nuclear bomb, as well as anxiety that the civil war in Syria might spill over the border, with Western powers reluctant to get involved.

The long-running Middle East peace process took a back seat at the start of Obama’s four-day tour of Israel, the West Bank and Jordan.

The president brought no new initiatives with him. He expressed a desire for a resumption of Israeli-Palestinian talks while making no mention of settlement-building, a main factor behind the collapse of the last U.S.-sponsored negotiations.

He said he wanted to hear from each side before determining a way forward. He meets Palestinian President Mahmoud Abbas on Thursday in Ramallah.

At the airport arrival ceremony in Tel Aviv, Obama voiced his hopes for peace – without directly mentioning Palestinians.

“We stand together because peace must come to the Holy Land,” Obama said. “Even as we are clear eyed about the difficulties, we will never lose sight of the vision of an Israel at peace with its neighbours.”

Shortly after landing in Tel Aviv, Obama’s entourage flew by helicopter to nearby Jerusalem and then drove to his city centre hotel. Hundreds of banners boasting of “an unbreakable alliance” hung from lamp-posts, but only sparse crowds turned out to watch the president’s motorcade drive through shut-off streets.

Aware that many Israelis have reservations about him, Obama took steps to try to soften his image, smiling and joking with his guests, heaping praise on Israeli President Shimon Peres and appearing delighted as a group of schoolchildren sang for him.

Obama will make a speech to a group of carefully screened Israeli students on Thursday afternoon, where he is expected once more to play up historic ties between the two nations.

Annual U.S. military aid to Israel is put at $3 billion.