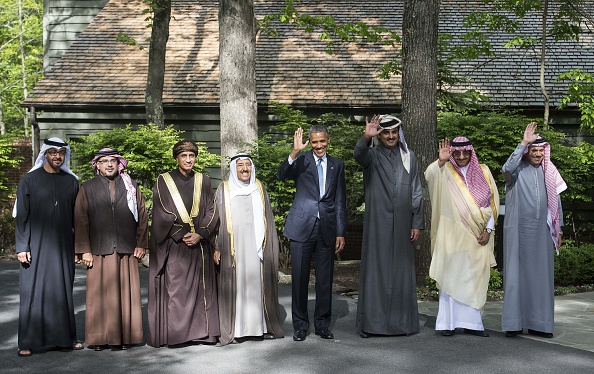 U.S. President Barack Obama said on Friday that Washington would help Gulf allies face conventional military aggression but also get them to work more in their own defence against any unconventional menace, such as destabilising Iranian actions in the region.

Obama said Syria’s civil war would “probably not” end before he left office, describing the situation as heartbreaking but adding that Washington could never on its own have brought that conflict to an end.

Many states of the Gulf Cooperation Council (GCC) are critical of what they see as Obama’s hesitant approach to the war in Syria, where President Bashar al-Assad is backed by their regional rival Iran.

Obama said he sought to reassure Gulf states anxious over U.S.-led efforts to reach a nuclear deal with Iran, saying Tehran would have to “reearn the trust of the international community” by accepting close monitoring of its nuclear work.

“The alternative is not to have any idea what is taking place inside of Iran and that is, I think, a much more dangerous situation for everyone in the region,” he said.

The United States and five other world powers are seeking to reach a final deal with Iran on curbing its nuclear program by a June 30 deadline. The GCC agreed in a joint communique that a “comprehensive, verifiable” accord with Tehran would be in their interests.

Obama said the U.S. military would help Gulf Arab states defend against any conventional armed threat, such as Iraq’s 1990 invasion of Kuwait. When it came to non-traditional threats, Washington would work with Gulf Arab states to improve their own special forces, intelligence, and capability to stop weapons smuggling.

He suggested concerns about non-traditional threats centred on Iran. “When we talk about the need for us to have joint capabilities to address destabilising activities and conflicts in the region, some of those are directly related to the concerns surrounding Iran,” he said.

Obama rebuffed a suggestion by the interviewer that Syria could be his “Rwanda”, a reference to the 1994 genocide that came to haunt the then administration of President Bill Clinton.

“One of the things that I said in the summit… is all too often in the Middle East region, people attribute everything to the United States,” he said, adding he was “very frank with the GCC leaders … The United States ultimately can only work through Arab countries who are also working on their own behalf to deal with these issues.”

He said the United States had not launched missiles at President Bashar al-Assad in 2013 because his government had given up its stocks of chemical weapons.

In 2013, the United States threatened military intervention against Syria’s government after sarin gas attacks in August of that year killed hundreds of residents in Ghouta, a rebel-controlled suburb of the Syrian capital Damascus.

Damascus has denied using sarin or any chemical weapons in battle during Syria’s ongoing civil war.

On May 8 this year, diplomatic sources told Reuters that international inspectors had found traces of sarin and VX nerve agent at a military research site in Syria that had not been declared to the global chemical weapons watchdog.

Diplomats and analysts said the finding of VX and sarin supported assertions by Western governments that Assad had withheld some of his stockpile, or had not disclosed the full extent of Syria’s chemical capability or arsenal to the OPCW.