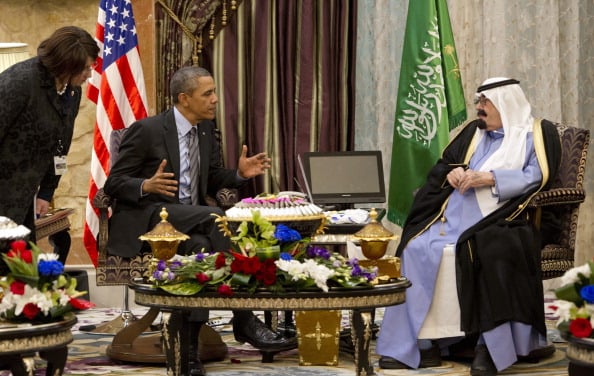 Saudi Arabia’s leaders hope U.S. President Barack Obama and their King Abdullah understand each other better after talks and can stabilise a close regional security alliance after months of rockiness over Middle East policy, diplomats said.

Friday’s two-hour exchange at Abdullah’s desert camp did not yield a shared statement or any evidence of policy changes, leading some Saudis to question whether differences over Syria’s war or Iran’s nuclear programme were closer to being resolved.

But diplomats said the mere fact Obama made the effort to visit and discuss issues “frankly” – in a U.S. official’s words – with the king should reduce the margin for public spats and counter an impression that both sides value the alliance less.

Obama visited the world’s top oil-exporter and birthplace of Islam aiming to soothe Saudi fears that the United States was retreating from its commitment to the security of Middle East allies and allowing Riyadh’s rival Iran more influence.

Those concerns, revolving particularly around the cautious U.S. approach to the war in Syria where Riyadh and Tehran back opposing sides, had led top Saudis to warn of a “major shift” from Washington and that they might “go it alone” in future.

Deputy National Security Adviser Ben Rhodes said before Obama and Abdullah met late on Friday night that the relationship had improved since the autumn thanks to better coordination on assisting Syria’s insurgents.

But the comments made by a senior administration official later on Friday did not indicate any shift in areas where the two sides have disagreed.

“It’s too early to judge whether the meeting is successful. Judge and jury on this is if the American policy on Syria changes quickly enough,” said Mustafa Alani, a security analyst with close ties to the Kingdom’s Interior Ministry.

That point was echoed by Abdullah al-Askar, chairman of the foreign affairs committee in Saudi Arabia’s Shoura Council, a body appointed by King Abdullah to discuss policy issues and advise the government.

“As you know, before the visit the relationship was a cold one, but not to a degree where it was in danger,” he said, adding that he was speaking in a personal capacity and did not have direct knowledge of what Obama and Abdullah discussed.

But Askar added that although the meeting had appeared to go smoothly, it was not yet possible to judge its success. “We can figure out on the ground…if there is a change (in U.S. policy), it means the Americans now understand the real story.”

Saudi faith in Obama was shaken by his approach to the Arab uprisings in 2011, when they wanted him to do more to protect shared allies who were unseated by popular protests, and by his failure to press Israel into ending settlement construction in occupied territory that Palestinians want for a state.

Last year their anger boiled over when Obama backed away from air strikes against the forces of Syrian President Hafez al-Assad after a poison gas attack in the country’s civil war, and when Washington and five other world powers agreed a preliminary deal with Iran over its disputed nuclear programme.

They have been pressing for U.S. involvement of some kind, whether air strikes or more help in turning the Syrian rebels into a competent military force, since early in the conflict but feel Obama has vacillated over how far to commit.

Saudi Arabia believes it is facing a life-and-death struggle with Iran for the future of the Middle East, including in Syria, and abhores the prospect of sanctions and other pressure on the Islamic Republic being lifted.

Washington’s early reassurances that it would not allow Iran more scope to be involved in Arab issues in exchange for a nuclear deal were met with suspicion in Riyadh. But as the interim nuclear accord has shown little sign of being broadened into a permanent settlement, their concerns have diminished.

Nevertheless, Riyadh had hoped for concrete developments on improving the weapons flow to Syria’s rebels, especially after U.S. media reported last week that the White House was considering a new plan that involved providing more arms and stepping up training efforts.

But a senior administration official said after the meeting that U.S. reluctance to provide anti-aircraft missiles, seen by backers of the rebels as indispensable if they are to start turning the tables of the stalemated conflict against Assad, had not changed.

In this case, he said, “it’s not clear to me that either side got very much other than words and reassurances”.

A Saudi source said the lack of tangible action was “expected” and that the Kingdom’s rulers had lost their trust in Obama when he backed away from military action against Assad.

Alani said: “The question is how fast he (Obama) is going to deliver on his promises. This is a major issue now. Especially on Syria. They will give it a month or two to see if there’s a shift. If it isn’t happening, we’ll go (back) to square one.”