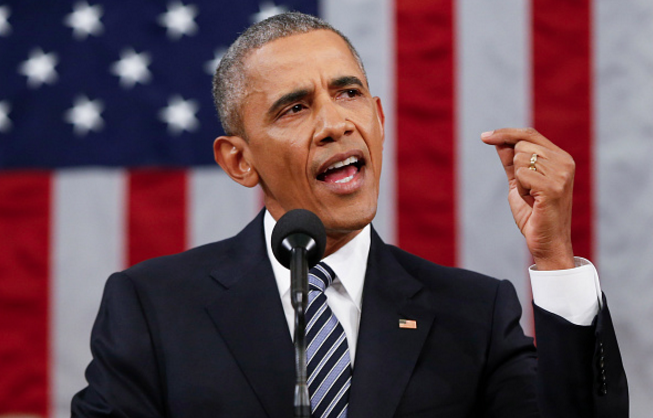 The United States must continue its offensive against the Islamic State of Iraq and Levant, President Barack Obama urged in his final State of the Union speech to the Congress on Tuesday.

Touching upon a range of issues, he stressed that the first priority for the country was to “protect the American people and go after terrorist networks.”

“Both al Qaeda and now ISIL pose a direct threat to our people, because in today’s world, even a handful of terrorists who place no value on human life, including their own, can do a lot of damage. They use the internet to poison the minds of individuals inside our country; they undermine our allies,” he said.

However he also rubbished “over-the-top claims” that the conflict against ISIL heralded the start of world war III.

“Masses of fighters on the back of pickup trucks and twisted souls plotting in apartments or garages pose an enormous danger to civilians and must be stopped. But they do not threaten our national existence.

“That’s the story ISIL wants to tell; that’s the kind of propaganda they use to recruit. We don’t need to build them up to show that we’re serious, nor do we need to push away vital allies in this fight by echoing the lie that ISIL is representative of one of the world’s largest religions. We just need to call them what they are — killers and fanatics who have to be rooted out, hunted down, and destroyed,” he added.

Obama also highlighted that the US along with its coalition of more than 60 countries had conducted nearly 10,000 air strikes against ISIL and had trained local forces to reclaim territory in Iraq and Syria.

“If this Congress is serious about winning this war, and wants to send a message to our troops and the world, you should finally authorise the use of military force against ISIL. Take a vote. But the American people should know that with or without Congressional action, ISIL will learn the same lessons as terrorists before them,” he added.

The President also conceded that the world was going through a period of rapid change.

“The Middle East is going through a transformation that will play out for a generation, rooted in conflicts that date back millennia. Economic headwinds blow from a Chinese economy in transition. Even as their economy contracts, Russia is pouring resources to prop up Ukraine and Syria — states they see slipping away from their orbit. And the international system we built after World War II is now struggling to keep pace with this new reality,” he said.

However, the US has the “strongest, most durable economy” in the world, he claimed. The country has managed to create more than 14 million new private sector jobs in the last 70 months; grow its auto and manufacturing industries and cut deficits.

Looking ahead he also urged the American people to “reject any politics that targets people because of race or religion”.