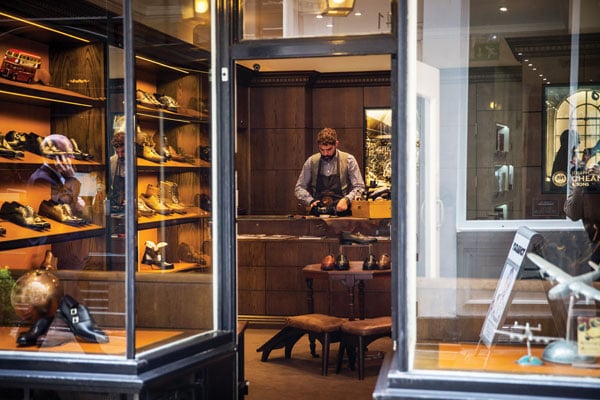 If Savile Row is the spiritual home of classic gentlemen’s tailoring, its footwear equivalent is Northamptonshire. Seventy miles northwest of London, the county has been a hub of quality shoemaking for centuries thanks to its close proximity to all the essential raw materials needed to treat leather.

Its location also enabled a wide distribution network to be established, and by the mid-17th century the county’s shoemakers were regularly meeting the army’s huge demand for robust footwear for its soldiers. The industry’s expansion continued apace, and by 1841 almost 2,000 shoemakers were plying their trade in the town of Northampton, the county’s administrative centre.

Cheaper shoes manufactured abroad saw the industry decline rapidly in the 20th century. But in recent decades a significant revival has taken place, with many of Northamptonshire’s shoemakers emerging from decades-long dormancy to tap into their rich heritage and become prestigious global brands.

So what gives shoes made in Northamptonshire their cachet? Apart from beautiful design, top-quality leather, and the fact that their craftsmen (or ‘cordwainers’ to use the correct lingo) take several years to hone their skills, it’s their use of Goodyear welting. This technique entails a strip of leather (or ‘welt’) being sewn around the bottom edge of the shoe, attached to the upper and insole, and then sewn to the outer sole. The advantage of a shoe made using Goodyear-welted construction is that, unlike a shoe that has been glued together, it can be repeatedly resoled, adding potentially decades to its lifespan. Convinced? Good. Now you just need to decide which of these venerable Northamptonshire shoemakers is the right fit for you.

Based in the same Victorian red brick factory for 130 years, Cheaney were formed in 1886 to manufacture classic, Goodyear-welted footwear for stylish gentlemen. “While as a company we occupy a position as one of Britain’s premium manufacturers, we believe that our collection offers a little more style and appreciation of fashion trends than that of many of our competitors,” says Neil Kirkby, head of sales at Cheaney Shoes. “The Holyrood in bronzed espresso represents the pinnacle of our manufacturing – a classic double buckle shoe in burnished calf skin that incorporates oak bark soles, in-channel welting and the fiddle waist shank.”

“Crockett & Jones are known for having a very honest balance between price and quality,” says James Fox at Crockett & Jones. “Quality is the mark of our shoes and boots and it can be appreciated in every pair. We’re not  in the market of producing shoes made from cheaper, corrected leathers, only using the finest materials that we are fortunate enough to source from our loyal suppliers.” Fox cites the Cavendish Tasselled Loafer as a current favourite, especially on the fashion-forward streets of Tokyo, adding that the “classic Black Calf Oxfords: Connaught, Hallam, Lonsdale and Audley” are models that epitomise the brand.

Celebrity wearer: Daniel Craig as Bond in Skyfall and Spectre

Familiar to anyone au fait with Dubai Mall’s Fashion Avenue, the mighty John Lobb is probably the best known of the great English shoemakers and has shod the feet of the great and good since 1866. Founded in London, John Lobb now has a workshop in Northampton and was acquired by the Hermés Group in the 1970s – although the London bespoke workshop, John Lobb Ltd, remained in family hands and continues to operate independently. John Lobb shoes are renowned for their elegant shape and minimalist styling, typically seen in the Marldon model.

Celebrity customers: Frank Sinatra, Dean Martin and more assorted maharajahs, kings and business moguls than you can shake a shoe tree at

Grenson was one of the pioneers of the Goodyear welting method in the 19th century and later supplied the soldiers of the British armed forces during the First and Second World Wars. Today, its shoes are sold in most top London department stores and it also has stand-alone shops in London and New York. In 2013,  it started an apprenticeship scheme for shoemakers to draft in some fresh blood. Its Desmond boot in pickled walnut hi-shine leather is just the thing for pounding the cobbled streets of cold European cities – or even chilly Dubai shopping malls.

Although purchased by Italian luxury giant Prada in 1999, Church’s remains quintessentially English and its shoes are still made in Northamptonshire where the company was founded in 1873. With Prada overseeing  a more aggressive global strategy, the shoemaker now boasts stores in Milan, Paris, Rome, New York and Hong Kong, among other cities. The Prada influence is apparent in some of the more unorthodox styles, but it still does the stone-cold classics well, including some superb monk straps, such as the Becket models.

Northamptonshire’s oldest shoemaker was founded in 1829 and has a huge presence in the swanky shopping districts of London where it has 11 stores. Its repertoire is extensive; whether you’re looking for a sturdy country boot, a chunky brogue, or a sleek monk strap – they sell it, quite possibly in several different colours. The brand is a particular favourite with bankers, politicians and the monarchy. The model that encapsulates the brand has to be the Bourton brogue shoe in tan.

There are Edward Green stores in London, Tokyo and Paris, selling to the most discerning arbiters of male style. The best-looking Edward Green shoes have an antique patina that gives them a charm from a bygone age. Its shoes are available in strictly limited quantities, as the company produces no more than 350 pairs a week. They’ve been making their superb Galway boot, which looks equally at home paired with tweed or selvedge denim, for the best part of a century, and they’ll probably still be making it in the year 2117.

Celebrity customers: Ernest Hemingway and the Duke of Windsor are past clients

Founded in 1880, Barker is another shoe manufacturer that ensured British troops in the two world wars were suitably booted. Four generations of the Barker family steered the company through good times and bad, right up until the 1950s, but today it is owned by an international group. The fact that it has a branch in Moscow gives you some idea of the breadth of Barker’s appeal as a fine shoemaker. Its Skye derby model in black grain is the perfect smart office shoe.

Established in 1880 by John Loake, this company, which claims to have made more than 50 million pairs of Goodyear welted shoes, is today run by his great grandson Andrew Loake. As well as shodding the feet of the British army through two world wars, it made cossack boots for the Russian army. That versatility continues today, with a wide variety of modern and classic styles. Its ‘Caine’ suede Chelsea boot blends 1960s styling with contemporary comfort.

Though not based in Northampton, leaving out George Cleverley would be madness. Famous for its chisel- toed bespoke shoes (though it does ready-to-wear  too), George Cleverley resides in the Royal Arcade off Old Bond Street in London. Prince Charles was once gifted a pair of brogues made using deer leather that was found in a ship wrecked off the English coast in the 18th century and recovered by divers in the 1980s. And you thought your limited edition Nike Air Jordans were the height of exclusivity.