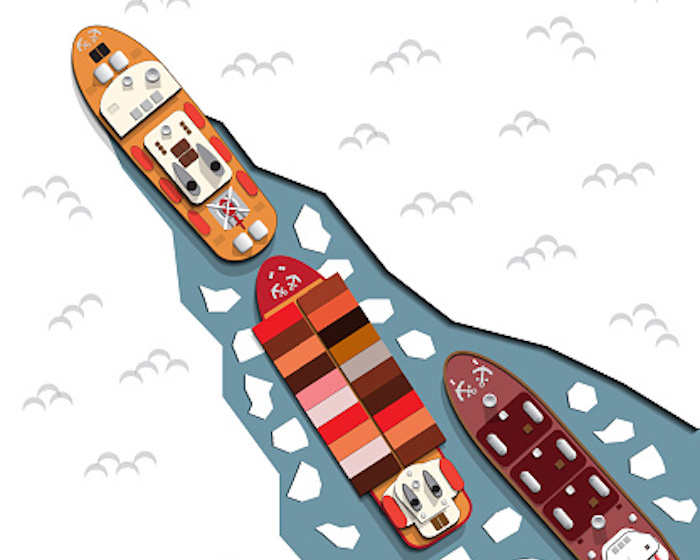 Unless you have been living under a literal rock or been trapped on a deserted island for a number of years with no means of communicating with the outside world, you’ve heard the Arctic is melting.

Much ink has been spilled as to why it’s so critical we stop the melting, or at least mitigate the effects as much as possible (that is, if we don’t want to be underwater in a few years). Similarly, the potential geopolitical impacts – particularly in terms of nations such as the US, China and Russia all vying for influence – have also been speculated upon at length.

In terms of trade, the melting Arctic obviously means it could take far less time to transport goods from, say, Shanghai to New York. A lengthy journey across the vast Pacific and through the Panama Canal – or down through the piracy-prone Strait of Malacca, the equally piracy-plagued Somali coast, and up through the Suez Canal before transiting the Mediterranean and then the Atlantic – can be dramatically shortened by passing through where polar bears used to roam. And there are already pushes to move as much trade through the Arctic as quickly as possible: in fact, as much as 5 to 15 per cent of China’s total trade value could be shipped through the so-called Polar Silk Road by as soon as 2020, according to the government-run Polar Research Institute of China.

But the so-called benefits will come from a serious cost – far beyond the obvious issue of rising sea levels. Financially speaking, a study published earlier this year in the scientific journal Nature Communications estimated the warming Arctic could actually end up costing the world economy more than a mind-boggling $70 trillion by 2100. As Kevin Schaefer, of the National Snow and Ice Data Centre in the US and a co-author of the study, told National Geographic: “The most important thing to remember about our study is the greater the warming, the stronger the feedbacks and the higher the costs to society.”

And then there’s the impact rerouting trade through the Arctic could have on economies in the Middle East and North Africa, particularly Egypt and the Suez Canal. Fewer ships passing through the region means less money. And less money could create economic challenges which could lead to political challenges – in a region where the Arab Spring is still fresh in many people’s minds.

Yet things have a ways to go before having a hugely dramatic impact. According to Andrew Lepczyk at the Hinrich Foundation – an organisation which supports sustainable global trade – there were 19 cargo ship transits of the Arctic’s Northern Sea Route in 2016, compared to 16,833 transits of the Suez Canal and 13,114 transits of the Panama Canal. As Lepczyk sums things up: “For now, while global powers ramp up their capabilities and sort out maritime codes and governance of these waterways, the Arctic routes will remain merely supplemental to the world’s main canals and trade waterways.”

Things are undeniably heating up, however – no pun intended. The question will be whether the warming Arctic will make things too hot for the world economy (to say nothing of humanity) to handle.