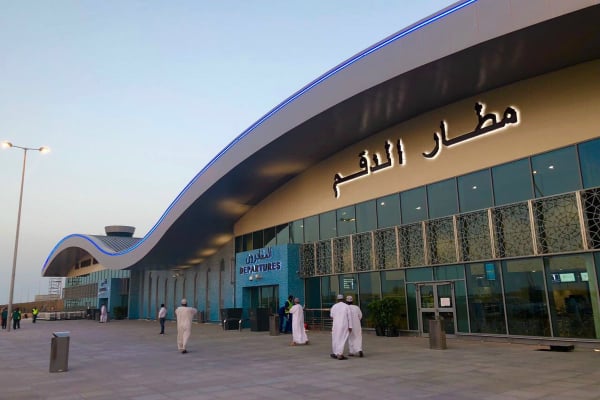 The new passenger terminal at Oman’s Duqm International Airport has received its first after beginning operations on Monday.

Terminal B officially began commercial operations at 1:30pm. An Oman Air service from Muscat, WY935, was the first flight to arrive at 2:30pm.

Following this, the first flight to depart will be return service WY936 at 5:00pm, the Ministry of Transport and Communications said.

A video posted on Twitter showed WY935 being greeted with a water canon salute upon arrival.

The terminal building spans 8,660sqm and has a capacity for 500,000 passengers annually, with the potential to expand to two million. Facilities include restaurants and retail outlets.

Prior to launch, airport staff conducted 45 days of testing.

The project forms part of a series of airport upgrade and expansion works underway in Oman.

In March a new passenger terminal opened at Muscat International Airport with a capacity for 12 million passengers a year.

Duqm itself, on Oman’s southern coast, is being transformed from a fishing village to an industrial and transshipment centre designed to support the sultanate’s economic diversification efforts.

Current facilities include a port and dry dock, with an oil refinery and petrochemical facility also under construction with Kuwaiti investment.

The project is also backed by China under its ‘belt and road’ initiative. Chinese consortium Oman Wanfang is aiming to invest up to $10.7bn in the project, chief executive Ali Shah told Reuters last September.