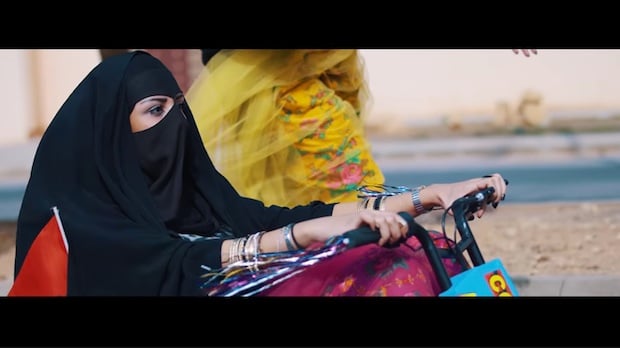 The clip, called ‘Hwages‘, has racked up over 2.5 million views on YouTube since it was uploaded on December 23.

The video touches upon various issues faced by Saudi women such as the inability to drive vehicles and their dependence on men for matters pertaining to travel abroad.

The women, clad in flowered outfits and sneakers underneath their abayas, also break tradition by dancing, rollerblading and riding bikes while men glare at them.

A mask of newly elected US President Donald Trump also makes an appearance, with the video referencing that he leads a so-called “House of Men”.

Shared widely on social media, including by prominent personalities such as Ameera Al Taweel, the video has once again sparked off a debate about women’s rights in Saudi Arabia.

Saudi Arabia’s government has gradually moved to improve rights for the kingdom’s estimated 10 million women and girls in recent years.

However, certain issues like the right to drive remain prohibited.

In November, Saudi billionaire Prince Alwaleed bin Talal Al Saud called for the kingdom to remove the ban on women driving in the country, saying it is hampering economic and social growth.

In a long-worded article, the businessman argued that the ban was an “infringement on a woman’s rights”.

“Having women drive has become an urgent social demand predicated upon by current economic circumstances,” he said.

In September, activists in Saudi also e-mailed a 14,700-signature petition to the government, urging an end to the guardianship system that gives men control over their female relatives.

Under the existing system a male family member must give permission for a woman to work, study, marry and travel.

Starting as a campaign on Twitter early in 2016, momentum increased following a critical report on the topic by Human Rights Watch.