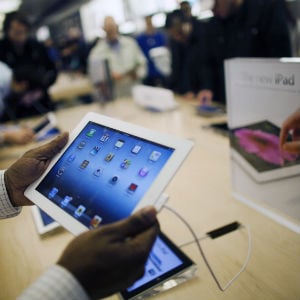 Four days after its international release, Apple’s new iPad has finally reached the UAE’s shops. The device was scheduled to be launched in the country on March 18, but it has only reached select locations so far. While Jacky’s Electronics confirmed its availability, electronics stores Plug-ins, Jumbo and Emax said that they had not yet received the device, and were unsure when it will be available.

Apple’s third generation iPad first went on sale in select countries including the US, Australia, Japan, Singapore and Hong Kong on March 16. According to reports, more than 750 fans gathered outside Apple’s flagship store in New York, waiting for hours to get the device. The tablet will be officially distributed in 25 additional countries on March 23, the company said.

The device is already in high demand, and according to the Apple website, new orders won’t be shipped for another two to three weeks.

The latest version of the iPad comes with a more powerful processor, a better camera, and a high-definition “retina” display, which has already received rave reviews.

In the UAE, Jackys currently has only the 16GB and 32 GB models, which are priced at Dhs3199 and Dhs3699 respectively.