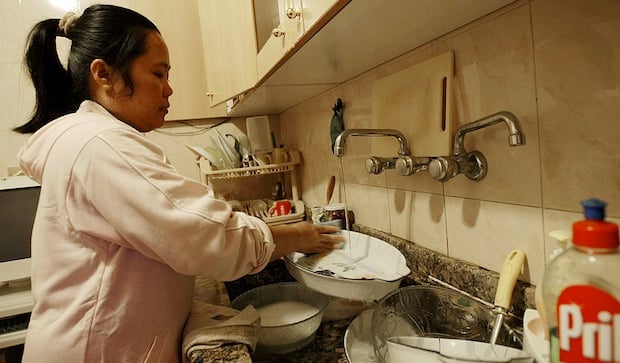 The UAE’s Ministry of Human Resources and Emiratisation has said it will soon open new centres for hiring domestic workers in Dubai, Sharjah and Ajman under a public private partnership.

The Tadbeer Centres will provide visa, orientation and training services and are intended to protect the rights of domestic workers by ensuring working conditions and accommodation are appropriate, according to state news agency WAM.

Their implementation follows approval of a new domestic worker law last year, which is designed to guarantee basic rights including the payment of salaries within 10 days of being due, the entitlement of one day’s rest per week and 12 hours of rest per day and 30 days of paid vacation a year.

“The one-stop centre will streamline services related to domestic workers and help keep an accurate database of their information for both contractual parties,” said ministry director of labour relations for domestic work Ahmed Al Yassi.

The ministry will licence operators “according to their capacity to meet high standards and ensure their customers’ ongoing happiness”, according to the announcement.

The centres will be responsible for conducting pre-arrival interviews to ensure workers know their contractual rights, provisioning training and education, resolving disputes between workers and employees and checking on worker housing and accommodation.

The announcement follows Abu Dhabi Judicial Department’s decision last week to establish dedicated prosecution units for cases involving the abuse of domestic workers, who are among the most vulnerable groups in the Gulf Cooperation Council.

Recently labour conditions in the region have come under particular scrutiny after the Philippines banned workers from being deployed to Kuwait.

This followed several abuse cases including that of a domestic worker, whose body was found in a freezer more than a year after she went missing.