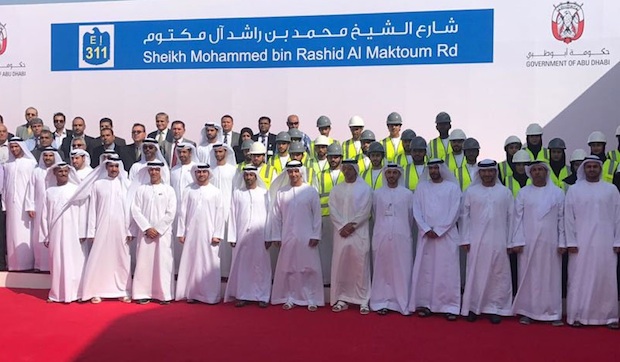 The new 62-km highway between Abu Dhabi and Dubai was inaugurated on Tuesday and has been named after UAE Vice President and Prime Minister and Dubai’s ruler Sheikh Mohammed bin Rashid Al Maktoum.

The Dhs2.1bn project, launched in the first quarter of 2014, has been completed one month ahead of the schedule to mark the 45th UAE National Day – which falls on December 2.

Sheikh Hazza bin Zayed Al Nahyan, deputy chairman of Abu Dhabi Executive Council, said that the highway was named after Sheikh Mohammed in recognition of the leading role he is playing in the UAE’s growth.

“Thanks to his initiatives and inspiring patriotism, the UAE has been able to earn top positions in various spheres,” Sheikh Hazza said at the inauguration.

It includes six interchanges and six underground passes and has four lanes in each direction.

With the capacity to handle 8,000 vehicles an hour, the new highway is hoped to ease traffic congestion – especially during peak hours, and reduce accidents.

The new road is also hoped to trigger the development of new residential areas such as South Al Shamkha, North Al Wathba and Al Falah, and ensure further development of existing areas, including Al Shamkha, Al Shawamekh and Bani Yas.

“This historic project was managed and carried out by two Emirati engineers, which reflects the vision of Sheikh Mohammed bin Rashid and Sheikh Mohamed bin Zayed for greater roles and responsibilities and opportunities for the youth to enable them to innovate,” said Sheikh Hazza.

It was executed by the Abu Dhabi General Services Company (Musanada) in co-operation with the Department of Municipal Affairs and Transport.