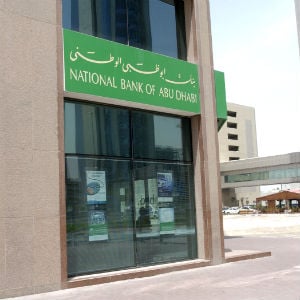 National Bank of Abu Dhabi is eyeing a return to global debt markets with a $750 million five-year dollar bond.

The lender launched the bond at 190 basis points over midswaps, arranging banks said, at the tighter end of guidance, indicating healthy demand for the issue.

Guidance for the bond, which is to be issued under the bank’s $5 billion programme, was between 190 to 200 basis points over midswaps.

NBAD, 70.5 per cent-owned by the Abu Dhabi government and the largest bank by market value in the UAE, held investor meetings in Switzerland and Britain in February.

The lender issued $20 million in a private placement in September at 4.8 per cent, but CEO Michael Tomalin has repeatedly said NBAD would jump back into global debt markets if a window opens up.

Traders expected pricing on NBAD’s bond to tighten further ahead of launch.

Another trader earlier said NBAD was a very safe name in the market, and pricing “may even get tighter.”

Barclays, HSBC, UBS, and NBAD itself are bookrunners on the latest deal.

Abu Dhabi’s five-year credit default swaps, or the cost to insure against default, stood at around 118 basis points levels on Friday from nearly 130 basis points at the beginning of the month, according to Thomson Reuters data.