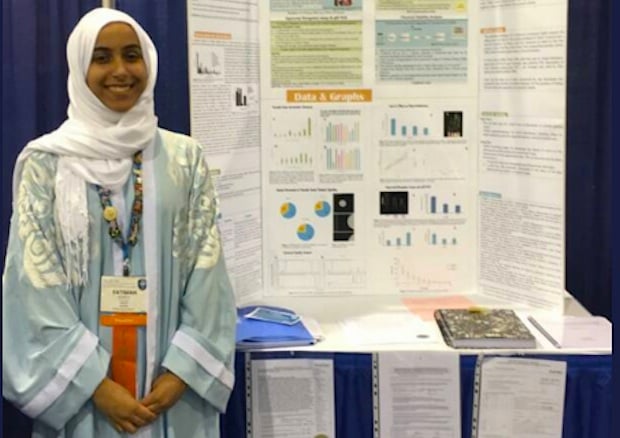 National Aeronautics and Space Administration (NASA) has named one of its asteroids after a female Saudi student for her efforts in the field of science, the official Saudi Press Agency (SPA) reported.

The asteroid was named Al-Sheikh 33535 after 19-year-old Fatima Abdel-Moneim Al-Sheikh, “in recognition of her efforts and excellence in her research in Botany,” SPA said.

Al-Sheikh won the second place at the Intel International Science and Engineering Fair (Intel ISEF) in 2016 for her research entitled ‘Determination of the effectiveness of innovative Strygolactone-Carl 2 on seed germination of parasitic weeds‘.

The student was nominated for the fair by Saudi Arabia after she won the National Olympiad for Scientific Creativity held annually by the King Abdulaziz and his Companions Foundation for Giftedness and & Creativity (Mawhiba) along with the Ministry of Education.

Prince Turki bin Abdullah bin Abdulaziz, chairman of Mawhiba congratulated the winner and her family, and urged “all the talented young Saudi people in science, research and creativity to continue along the path of innovation and excellence.”

Speaking to local newspaper Okaz, Al-Sheikh said she plans to continue her education at Brown University in the US.

This is not the first time that NASA has recognised students from the Middle East.

While a student at the Jubilee School in 2013, Salahaldeen Ibrahim Abu-Alshaikh won the second place in Mathematics at the Intel ISEF.