Dubai developer Nakheel has announced that it will launch for sale 94 plots as part of the first phase of its new Deira Islands project.

The plots, spread across two of the project’s four islands, will go on sale from Sunday, March 30. They include 15 resort beach plots and 79 waterfront hotel plots, ranging from 50,000 to 670,000 square feet, the company said.

The two islands are expected to add 23,421 hotel keys and 31,000 apartment keys when complete, it added.

The 15.3 sq km Deira Islands development, coming up in the vicinity of the Nakheel’s Palm Deira project – which was shelved during Dubai’s property crash, was first announced during the Cityscape exhibition in October last year. 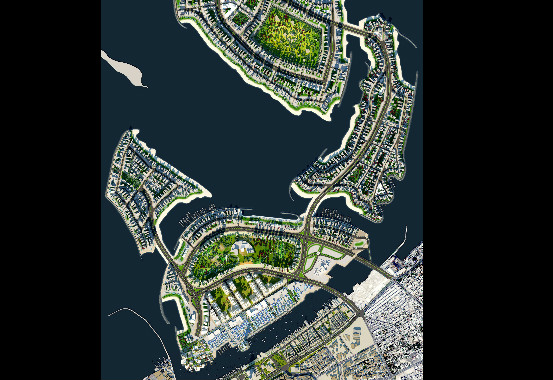 The mixed-use project, featuring a 21km beachfront, is anticipated to accommodate over 357,000 people when ready.

“We are very confident about the project and expect a good response to the launch,” said Nakheel chairman Ali Rashid Lootah. “We have been receiving several enquiries since we announced the project during Cityscape.

“We are also offering investors a five-year payment plan to make it more attractive,” he told reporters.

“This project will help revive Deira as a destination,” he added.

There will be a strong focus on three and four star properties, in line with Dubai’s recent push on increasing affordable hotel accommodation in the city.

“Currently, there are no beachfront hotels in that segment in Dubai, and hence we saw an opportunity to deal with that shortage,” he said.

The developer also stated that it is planning to develop two resorts and four hotels on the two islands currently being launched.

Nakheel will also develop an Arabic souk-style night market, an amphitheatre for 30,000 people and a marina that can accommodate large yachts in the Deira Islands project.

Work on all these developments is expected to start this year, with the hotels slated for completion in around three years, said Lootah.

He also asserted that the development will be “well-connected” to the mainland by road bridges. Nakheel is working with Dubai’s Roads and Transport Authority (RTA) to accelerate the road access routes.

“The Deira Islands project is in line with Dubai’s vision to welcome 20 million visitors by 2020 and we have been co-ordinating with the Dubai Department of Tourism regarding the project,” he said, adding that there were no fears of hotel over-supply in the market.

He also confirmed that Nakheel will release residential plots for sale during the second phase of the Deira Island project.

In total, more than 500 plots will be available across the two islands.

Nakheel, one of the worst hit during Dubai’s property crash in 2009, has recovered strongly in the last year. As part of its current strategy, it is concentrating on developing cash-generating assets, with a focus on retail and hospitality, Lootah said.

Overall, Nakheel plans to have 10 hotels operational across Dubai by 2020, he said. In the initial stages, they will managed by third-party operators, he added.