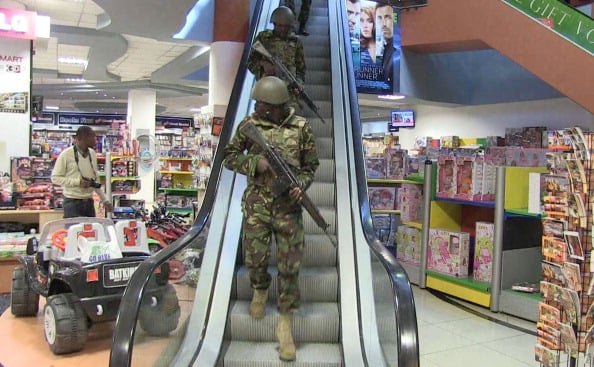 When Islamist fighters from Somalia’s al-Shabaab group stormed a Nairobi mall at the weekend, they knew they were hitting a high-profile symbol of Kenya’s economic power in booming Africa.

The Israeli-built Westgate mall offering multiple levels of shops, cafes and restaurants epitomised the African consumer bonanza that is drawing foreign investment – from West and East – to one of the world’s fastest growing continents.

Like the Algerian gas plant attacked by Saharan Islamists in January, the beige-coloured mall offered a high-impact target for militants to kill dozens and sow panic as they increasingly wage cross-border jihad, challenging Africa and the wider world.

Kenya said its security forces were in control of the mall on Tuesday after Saturday’s assault, which killed at least 62 people, and a stand-off lasting several days.

From Mali to Algeria, Nigeria to Kenya, violent Islamist groups – tapping into local poverty, conflict, inequality or exclusion but espousing a similar anti-Western, anti-Christian creed – are striking at state authority and international interests, both economic and political.

John Campbell, a former U.S. ambassador to Nigeria, said he believed insurgents like those who rebelled in Mali last year, the Nigerian Boko Haram Islamist sect and the Nairobi mall raiders were also partly motivated by anger with what he called “pervasive malgovernance” in Africa.

“This is undoubtedly anti-Western and anti-Christian but it also taps into a lot of deep popular anger against the political economy in which they find themselves, in which a very small group of people are basically raking off the wealth,” he said.

Campbell saw a darker side of the “Africa Rising” story, where growing social inequalities and tensions in ostensibly booming nations were being ignored or obscured by positive economic growth numbers that distorted the real picture.

He noted that the more than 60 victims of the mall attack included members of the Kenyan elite, including a nephew of Kenyan President Uhuru Kenyatta, and foreign expatriates.

Mark Rosenberg, Senior Analyst for Africa of the Eurasia Group consultancy, said the Nairobi attack would “increase the risk profile for Africa”. This was always a “jumpy” barometer, he added, because there was “an unfortunate tendency to treat the continent as one country”.

Nevertheless, he saw no “structural threat” from the African Islamist insurgencies to the growth trend on the continent over the last decade.

Rosenberg noted the Kenyan economy had bounced back strongly from the 1998 bombing by al Qaeda’s East Africa cell of the U.S. Embassy in Nairobi which killed more than 200 people.

Al Shabaab spokesmen cited the presence of Kenyan troops fighting them in neighbouring Somalia as a motive for the mall raid. However, survivors said some of the attackers had picked victims according to their religion.

They “called on all Muslims to leave the shopping centre,” Israeli businessman Yariv Kedar wrote in an eyewitness account published by the Tel Aviv daily Yedioth Ahronoth.

Other survivors told reporters that those who identified themselves as Muslims were ordered to recite a verse from the Koran, or to name the Prophet Mohammed’s mother. Those who could do so were allowed to go; those who failed the test were killed.

This religious factor is a common denominator of nearly all of the insurgencies and conflicts across the Sahel, northern Nigeria and the Sudans, into east Africa and the Horn of Africa. It follows the historical fault lines of where the mostly Islamicised north of the continent meets the predominantly Christian and non-Muslim south below the Sahara.

Ambassador Bethuel Kiplagat, founder member and adviser of the Nairobi-based African Peace Forum that researches peace and security issues, saw these militant strains of Islamism multiplying in Africa and across the globe.

“Something is fermenting in the world. There is a religious factor, an Islamic factor, but it is not mainstream Islam,” he said. He pointed to a weekend of apparently religious-inspired bloodshed that included suicide bombers killing 78 outside a Church in Pakistan on Sunday, and continuing violence between Iraqi Shi’ite and Sunni Muslims that killed 16 the same day.

“There is a struggle over what the nature of a state should be, religious or secular,” said Kiplagat, adding that universal values of sanctity of life, freedom and justice were under attack from these diverse forms of Islamist violence. “They want to take us back to the 10th or 11th century,” he said.

Although al Qaeda, now without its slain leader Osama bin Laden, has not been able to repeat on U.S. soil the Sept. 11, 2001 attacks on New York and Washington, experts say “metastasised” al Qaeda-inspired or -allied groups have been springing up across most of the world, including Africa.

Abdi Aynte, of the Mogadishu-based Heritage Institute of Policy Studies, said it was possible al Shabaab “sub-contracted” the Nairobi attack to followers from Kenya, East Africa or even further afield. The group is under pressure from an offensive by African troops in Somalia, said Aynte, who is director of the regional policy and security think tank.

Kenyan Foreign Minister Amina Mohamed said in a U.S. television interview “two or three Americans” and a British woman were among the militants who led the attack.

She said the Americans were “young men, between maybe 18 and 19 years old, of Somali origin or Arab origin, and had lived in the U.S., “in Minnesota and one other place”, she said.

Campbell said the different Islamist insurgencies challenging governments in Africa were diffuse and did not suggest an organised, centralised network. “There is no cave in Afghanistan where it’s all being worked through,” he said, referring to bin Laden’s old operations base.

They could still cause damage and mayhem in Africa, “but it’s much more difficult to imagine them flying aircraft into the Twin Towers”, he said, recalling al Qaeda’s 9/11 attack.

Nevertheless, the Nairobi raid could encourage other groups to seek out such high-profile targets, as was apparently the case after militants attacked the Indian city of Mumbai.

“One of the major concerns for CT (counter terrorism) officials is the demonstration effect of this kind of ‘soft target’ attack. Like the 2008 attacks in Mumbai, terrorist cells are learning that they can have strategic impact with dramatic terror focused on soft targets,” Juan Zarate, a former White House counter-terrorism adviser, told Reuters.

Eurasia’s Rosenberg said the Nairobi attack would again give prominence to Kenya in Western counter-terrorism strategies. This could also strengthen President Kenyatta’s campaign against crimes of humanity charges levelled against him and his deputy by prosecutors at the International Criminal Court in the Hague.

“This is an international war,” he said.