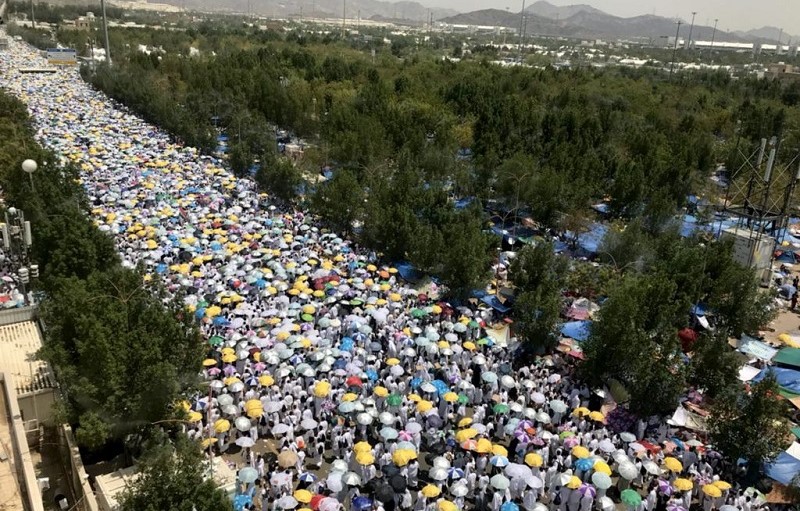 More than 2 million Muslims gathered at Mount Arafat on Monday for a vigil to atone for their sins, and then descended to Muzdalifah to prepare for the final stages of the annual hajj pilgrimage in Saudi Arabia.

Clad in white robes signifying a state of purity, the pilgrims spent the previous night in an encampment around the hill where Islam holds that God tested Abraham’s faith by commanding him to sacrifice his son Ismail and Prophet Mohammad gave his final sermon.

Other worshippers praying in the nearby Mina area ascended in buses or on foot from before dawn as security forces directed traffic and helicopters and surveillance drones hovered overhead.

Some of the faithful carried umbrellas to block the sun as daytime temperatures surpassed 40 degrees Celsius following an evening of thunderstorms and high winds. Men and women from 165 countries gathered side by side, while soldiers handed out bottled water and some people snapped selfies.

Pakistani pilgrim Mohamed Forqan, 30, said it was a great day to be a Muslim. “Here in Arafat we feel that we are born today asking Allah to forgive our sins,” he said.

Hilal Issa, 70, from Algeria, said he was praying for God to pardon all Muslims and save the Arab world from its afflictions.

Saudi Arabia has said more than 2.37 million pilgrims, mostly from outside Saudi Arabia, had arrived for the five-day ritual, a religious duty once in a lifetime for every able-bodied Muslim who can afford the journey.

After sunset, they moved on foot, by bus and in trains to the rocky plain of Muzdalifah to gather pebbles to throw at stone columns symbolising the devil at another location called Jamarat on Tuesday, which marks the first day of Eid al-Adha, or the feast of sacrifice.

“I feel at ease after standing at Arafat. This is a rite that one waits an entire life for,” said Ashraf Abdelrahman, 46. “I feel that I will return to Sudan like the day I was born.”

In a haj message, Ayatollah Ali Khamenei, leader of Saudi rival Iran, called for unity among Muslims as a defence against foreign enemies.

“Muslims should be vigilant about America’s malicious war-mongering policy aimed at Muslims killing Muslims,” he said in comments read by a representative on Iranian television.

The United States reimposed economic sanctions on Iran this month after pulling out of a 2015 international deal aimed at curbing its nuclear programme in return for easing sanctions.

Washington has said Tehran’s only chance of avoiding the sanctions would be to accept President Donald Trump’s offer to negotiate for a tougher nuclear deal, which Iranian officials have rejected.

Iranian television showed a handful of Iranian pilgrims carrying banners and chanting slogans against the United States and Israel.

In a midday sermon, senior Saudi cleric Sheikh Hussein bin Abdulaziz Al al-Sheikh also urged pilgrims to come together with their co-religionists but cautioned: “Haj is not a place for slogans and parties.”

Makkah Governor Prince Khalid al-Faisal said there were some 86,000 Iranian pilgrims this year and around 300 from Qatar, which is locked in a year-old diplomatic row with Saudi Arabia over alleged support for terrorism, which Qatar denies.

The world’s largest annual gathering of Muslims has in the past seen stampedes, fires and riots, with authorities sometimes struggling to respond. A crush in 2015 killed nearly 800 pilgrims, according to Riyadh, although counts by countries of repatriated bodies showed over 2,000 may have died, more than 400 of them Iranians.

Officials say they have taken all necessary precautions this year, with tens of thousands of security forces and health workers on hand to maintain safety and provide first aid.

Pilgrimage is also the backbone of a plan to expand tourism under a drive to diversify the kingdom’s economy away from oil. The haj and year-round umrah generate billions of dollars in revenue from worshippers’ lodging, transport, fees and gifts.

The authorities aim to increase the number of umrah and hajj pilgrims to 15 million and 5 million respectively by 2020, and hope to double the umrah number again to 30 million by 2030.