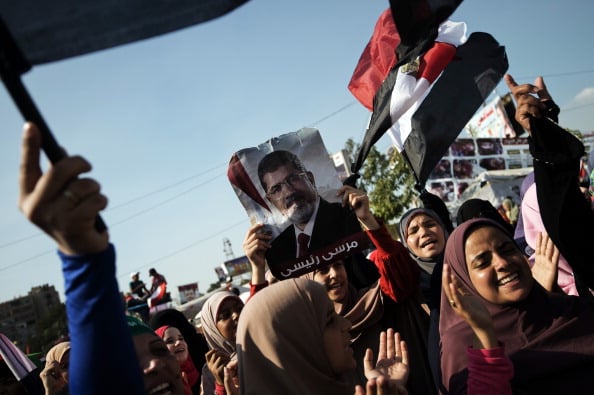 Egypt’s Muslim Brotherhood risks political elimination, with the new army-backed government threatening to ban the Islamist organisation after launching a fierce crackdown on its supporters that has killed hundreds.

Struggling to stamp its authority on Egypt following the ousting last month of President Mohamed Mursi, the country’s new rulers have upped the rhetoric, saying the Arab world’s most populous nation is at war with terrorism.

More than 700 people have died, most of them backers of Mursi, in four days of violence. That has earned Egypt stiff condemnation from Western nations, uncomfortable with Islamist rule but also with the overthrow of an elected government.

The crackdown has, however, drawn messages of support from key Arab allies like Saudi Arabia, which have long feared the spread of Brotherhood ideology to the Gulf monarchies.

Blaming a defiant Brotherhood for the bloodshed, Egyptian Prime Minister Hazem el-Beblawi proposed dissolving the group in a move that would force it underground and could usher in mass arrests of its members countrywide.

The government said it was studying the possibility.

“There will be no reconciliation with those whose hands have been stained with blood and who turned weapons against the state and its institutions,” Beblawi told reporters.

A statement from the United Nations said Secretary-General Ban Ki-moon condemned attacks on churches, hospitals and other public facilities and called for both sides to resolve the violence.

“The secretary-general believes that preventing further loss of life should be the Egyptians’ highest priority at this dangerous moment,” the statement said. “With such sharp polarization in Egyptian society, both the authorities and the political leaders share the responsibility for ending the current violence.”

Violence flared briefly on Saturday as backers of Mursi exchanged fire with security forces in a central Cairo mosque, where scores of Muslim Brotherhood protesters had sought refuge from clashes the day before that killed 95 in the capital.

Police finally cleared the building and made a string of arrests, with crowds on the street cheering them on and harassing foreign reporters trying to cover the scene.

“We as Egyptians feel deep bitterness towards coverage of the events in Egypt,” presidential political adviser Mostafa Hegazy said, accusing Western media of ignoring attacks on police and the destruction of churches blamed on Islamists.

Founded in 1928, the Muslim Brotherhood has deep roots in the provinces and won all five elections that followed the overthrow in 2011 of the autocratic Hosni Mubarak, appearing to cement themselves in the heart of Egyptian power for years to come.

But accusations that they were incompetent rulers intent only on monopolising government tarnished their reputation.

Hundreds of thousands of Egyptians took to the streets in June to denounce Mursi and the army says it removed him from office on July 3 to avoid a civil war.

Since then, the state media has turned ferociously against the group and there appeared to be little sympathy for the Brotherhood faithful amongst many ordinary Egyptians.

“Democracy did not work for Egypt, I am afraid,” said Hussein Ahmed, a 30-year-old banker in Cairo, who had protested against Mubarak in the 2011 uprising.

“Yes, the Brotherhood were elected, but they never cared about rights or freedoms of anyone but their own group. Why should we feel sorry for them now?”

Brotherhood leaders accuse the military of deliberately sabotaging their time in office and plotting their demise.

After two pro-Mursi protest camps were crushed by police on Wednesday, the Brotherhood launched a “Day of Rage” on Friday, and clashes left at least 173 dead. They have urged their supporters to take to the streets daily in the week ahead.

There were no reports of major rallies on Saturday.

The Interior Ministry said police had arrested more than 1,000 Muslim Brotherhood “elements” following Friday’s riots. The group said daughters and sons of the leadership had been targeted in an effort to gain leverage over the organisation.

The government has ordered a dawn-to-dusk curfew that looks set to last until the middle of September, leaving the normally crowded streets of major cities eerily deserted at sundown.

Looking to regain some semblance of normality, banks were due to re-open on Sunday for the first time since Wednesday’s carnage, and the stock exchange will also resume business, with trading cut to three hours from four because of the instability.