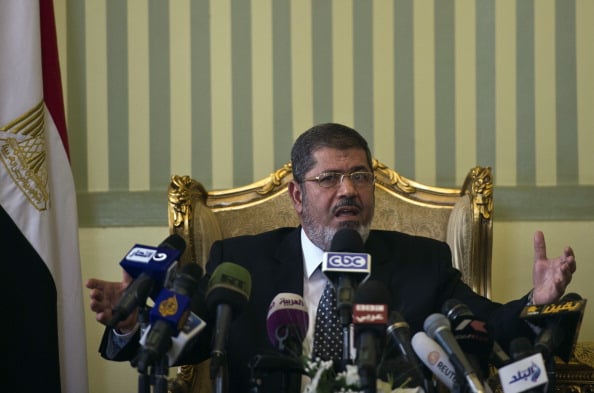 President Mohamed Mursi, in an address to the nation, said on Wednesday that the polarised state of Egypt’s politics was threatening democracy and could plunge the nation into chaos.

He acknowledged he had made errors, but also blamed unspecified “enemies of Egypt” for sabotaging the democratic system born in the uprising of 2011 and under which the Islamist Mursi was elected a year ago.

“Political polarisation and conflict has reached a stage that threatens our nascent democratic experience and threatens to put the whole nation in a state of paralysis and chaos,” he told an audience of officials and Islamist supporters in a speech that was broadcast live on television.

“The enemies of Egypt have not spared effort in trying to sabotage the democratic experience,” he added.

The speech began promptly as scheduled, when Mursi, from the Muslim Brotherhood, offered greetings ahead of the major Islamic holiday of Ramadan, starting in about two weeks.

“I stand before you as an Egyptian citizen, not as the holder of an office, who is fearful for his country,” he said before saying he would review his first year in office, which began on June 30 – a date protesters have chosen for mass rallies they hope can force him to resign.

“Today, I present an audit of my first year, with full transparency, along with a road map. Some things were achieved and others not,” Mursi said, without elaborating.

“I have made mistakes on a number of issues.”

At points, his speech was punctuated by cheers from supporters.

Thousands of opponents gathered in Cairo’s Tahrir Square, cradle of the 2011 revolution, to watch the speech but few expected Mursi to make significant compromises.

Hours before he spoke, two people were killed and more than 200 were treated for injuries in the city of Mansoura, north of Cairo, when Islamist supporters clashed with their opponents – the latest street fighting over the past few days that many fear may presage a massive showdown in the streets this weekend.