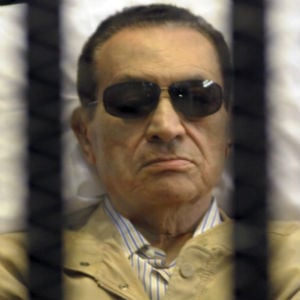 Deposed Egyptian President Hosni Mubarak’s health is “very critical” and the 84-year-old should be urgently moved to a hospital from the ill-equipped prison facility he is being held in, his lawyer said on Monday.

Farid el-Deeb told Reuters that Mubarak’s condition was worsening and that he had a frequent irregular heart beat.

The ousted leader was jailed for life on June 2 for failing to prevent the killings of protesters who rose up against him. He had been charged with ordering police to open fire. He was sent to Tora prison on the outskirts of Cairo.

Egypt’s prison authority had earlier approved a request to let Mubarak’s eldest son Alaa, who is being held at the jail pending trial, stay close to him in the prison hospital because of his deteriorating health, security sources said.

But requests from his lawyer and family to move Mubarak to a hospital have not been answered.

Opponents of Mubarak say the former president and those around him were exaggerating his condition to gain public sympathy.

Lawyer Deeb said the judicial officials had not responded to the hospital request because they feared a public backlash.

“This is deliberate murder. This is revenge. I am not saying release him. I am saying take him to a hospital where he can be kept and taken care of,” he said.

“The president is in a very bad state. Mubarak’s state is very critical and he must be transferred immediately to a hospital. He spent his life in service of the country and this is unacceptable to keep him in this state,” Deeb added.

Deeb said authorities had ignored medical records pointing to the ill-health which had kept him in a high-end private hospital for the duration of his trial.

One security source said Mubarak’s heart had briefly stopped on Monday and had been restarted by medical staff.

The acquittal for a lack of evidence of six senior police officers charged with the same crime as Mubarak angered many Egyptians who fear the ex-president may win an appeal.

Deeb said in June last year that Mubarak was suffering from cancer, although a government minister later appeared to play down that report.

Mubarak had requested his son Alaa be moved close to him after authorities earlier agreed to a similar request to have his youngest son, Gamal, brought next to him.

The state news agency, citing a security source in the Interior Ministry, said prison authorities approved the move in response to “a deterioration in his health”.

It also cited a source saying Mubarak suffered from high blood pressure and shortness of breath, prompting the doctors to put him on a respirator.

Gamal, once seen as being groomed for the presidency, and Alaa are being held in Tora prison pending a trial over a case of alleged stock market manipulation. Corruption charges they had faced with their father in his trial were quashed.

The website of state newspaper Al-Ahram said Mubarak was taken outside into the sun to help his recovery and was eating light foods, such as jelly.

Since he was moved to Tora prison hospital from a plush military hospital where he was held during the 10-month trial, speculation has been rife about his state of health. Such speculation also abounded as he aged in office.

Security sources said last week that Mubarak was given artificial respiration five times in one day and doctors recommended he be moved to a military hospital.

He has also reportedly slipped in and out of a coma at times, although prison sources said on Monday he was awake and with his sons.

Mubarak’s wife Suzanne and the wives of his two sons visited the ex-president on Sunday, the state news agency said.