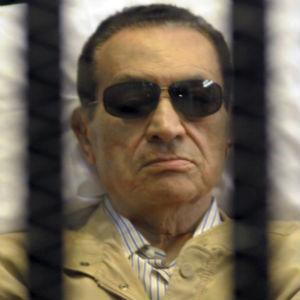 Ousted Egyptian president Hosni Mubarak was moved from prison to a military hospital on Tuesday after a health crisis, officials said.

Senior officers and military sources gave various accounts of the 84-year-old Mubarak’s condition, including that he was in a coma and on life support. But they said he was not “clinically dead,” as briefly reported by the state news agency.

The move came amid high tension over the election of a new, civilian president. Mubarak’s long-time Islamist adversaries in the Muslim Brotherhood say their candidate won the weekend run-off against a former general. But the result is still unknown.

Sentenced on June 2 to life imprisonment for his role in the killings of demonstrators who helped overthrow him during last year’s Arab Spring revolution, Mubarak has been portrayed as being in poor health by officials for the past year. He was wheeled in to court during his trial on a hospital stretcher.

Many Egyptians have been sceptical. Some protested when he was not sentenced to death. Many others suspect fellow officers, who pushed him aside after 30 years to appease the protesters, of conniving to give him a more comfortable confinement.

Mubarak’s legal team has been pressing to have him moved from the prison hospital to a better-equipped facility, saying he was not receiving adequate treatment for his condition. However, prison authorities previously refused to let him go.

There has been no clear statement from independent medical experts on what ails him, though state media have reported a variety of illnesses from shortage of breath to heart attacks.

On Tuesday evening, two security sources told Reuters he had suffered a heart attack and stroke and was in a coma. They said he was finally to be moved to Cairo’s Maadi military hospital – a smart complex by the Nile, where the last shah of Iran died.

Shortly afterward, the state news agency, in a report echoed by a hospital source at Maadi, said Mubarak was “clinically dead” – a condition normally defined by the lack of heartbeat and breathing, and one from which patients can be revived.

However, General Said Abbas, a member of the ruling military council, later told Reuters that, while Mubarak had suffered a stroke, “any talk of him being clinically dead is nonsense.”

Another military source said he was on life support: “He is completely unconscious. He is using artificial respiration.”

A third military source described the former leader as “almost stable,” without elaborating.

General Mamdouh Shaheen, of the military council, told CNN: “His health is deteriorating and he is in a critical condition.”

Private television al-Hayat broadcast video which it said was of Mubarak’s move. The images showed a patient on a stretcher being transferred from an ambulance into hospital.