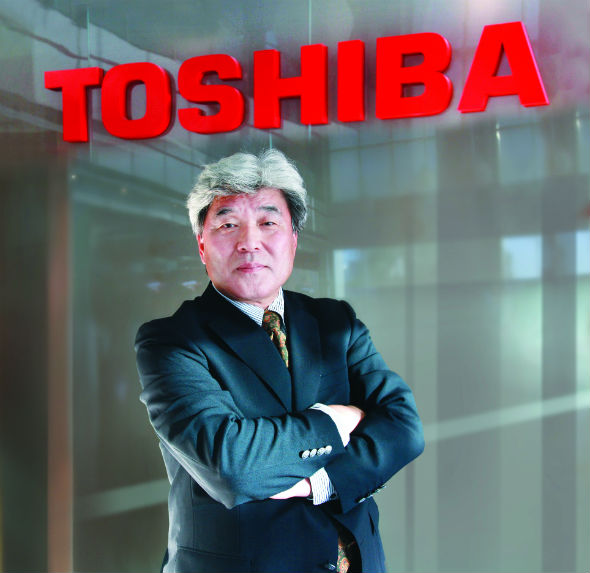 “No one cares about elevators being made by which companies – do you care?” I had to admit, I didn’t. I step into anywhere between two and five different elevators everyday, and I’ve never once stopped to check which company made one of them. “It’s really important, because Toshiba has the latest technology for elevators.”

I expect Yasuyoshi Matsunaga to tell me that in his role as managing director of Toshiba, Middle East and Africa. However his next claim, that Toshiba also developed the world’s fastest elevator, is backed up with a Guinness World Record.

Though it seems appropriate as we meet in Dubai, home of the world’s tallest building, Toshiba’s rocket-lift actually operates in Taiwan’s Taipei 101.
The Japanese company developed two of the world-record breaking lifts, both with a maximum speed of 1,010 metres a minute, or 60km/h, taking visitors from the ground to the 89th floor viewing platform in just 40 seconds.

“Burj Khalifa is only 600 metres a minute; it’s not so fast,” Matsunaga says. “Toshiba is still the quickest [in the world].”

Toshiba’s elevator success is an example of the company’s accomplishments with corporate contracts in the social infrastructure sector. There’s more to the company than TVs, speakers and laptops as some tech-savvy consumers may think.

Much of the company’s future social infrastructure work − which accounted for 37 per cent of Toshiba’s net sales over the last financial year − will be met in the Middle East and Africa region. With its regional headquarters in Dubai’s Jebel Ali Free Zone, supported by a branch office in Johannesburg and a second one due to open in Riyadh in January, Toshiba is determined to see growth.

“Toshiba is going to open a branch office in Saudi Arabia mainly focussing on infrastructure. Expansion of the infrastructure business is one of the key areas we’re going to focus on from now on,” Matsunaga explains.

Toshiba is still regarded as a leader in digital products, as Matsunaga proves, demonstrating their 4K TV − that’s four times the resolution of HD and allows for 3D without glasses.

Of greater intrigue though is Toshiba’s eco-friendly LED lights. So highly regarded are the bulbs − which last 40 times longer than incandescent lights and have one eighth of the energy consumption − they’ve been chosen to watch over one of the world’s most famous paintings: The Mona Lisa.

Toshiba started discussions with the Louvre museum in 2010 and Matsunaga was in attendance at the opening ceremony in Paris 12 months ago to see the LEDs in action.

“The French government had a strong wish to change the lightings from the conventional to the LEDs,” said Matsunaga.

“Now not only [are the LEDs] in the pyramid but they are also going into some of the important areas.”

The eco-friendly streak in the LEDs is mirrored throughout Toshiba’s business, with Matsunaga claiming it takes precedence over all other aspects of the business.

“Toshiba is looking for that type of [eco-friendly] contribution to societies and to the earth [even] sacrificing our profit. Contribution comes first; that is most important.”

It’s a nice sentiment from a big company that it’s thinking about the environment over its shareholders, especially in the Gulf with its poor environmental record.

Maybe that’s why Mona Lisa smiles the way she does; she knows Toshiba’s lighting is of the greenest nature.