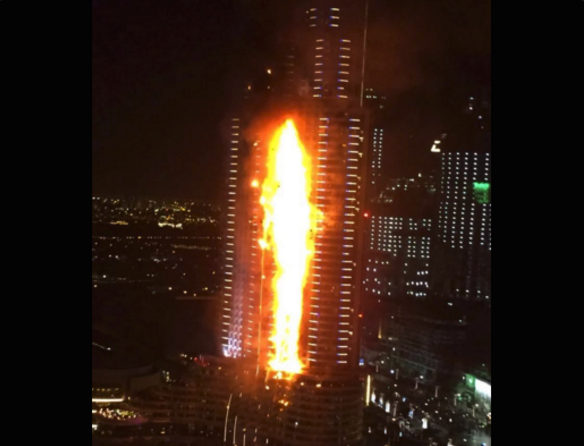 A massive fire engulfed parts of The Address Hotel Downtown Dubai – close to the Burj Khalifa – ahead of mega New Year festivities on Thursday night.

No casualties were reported but 14 people had minor injuries and one heart attack case was also registered due to over-crowding and smoke at the fire site, the Dubai Media Office said on Twitter. All of them “received prompt medical assistance.”

People were evacuated from the area and four squads of firefighters worked to control the blaze.

The fire is reported to have originated from outside the 20th floor at around 9.30pm. It did not spread inside the 63-storey luxury hotel, the Dubai Media Office said.

“Internal fire extinguishers are preventing spread of fire inside the hotel,” it said.

Dubai Media Office confirmed that as of 11.00pm, 90 per cent of the blaze was contained.

The Dubai Department of Tourism and Commerce Marketing will provide guests evacuated from Downtown Address hotel with alternative accommodation, it said.

Dramatic pictures and videos of the blaze were posted on Twitter by several witnesses who gathered to watch the fireworks at Burj Khalifa.

Despite the incident, the elaborate New Year celebrations planned at the world’s tallest tower Burj Khalifa continued as scheduled. A spectacular eight-act fireworks display with LED lights and 3D effects presented the ‘futuristic vision’ of the United Arab Emirates.