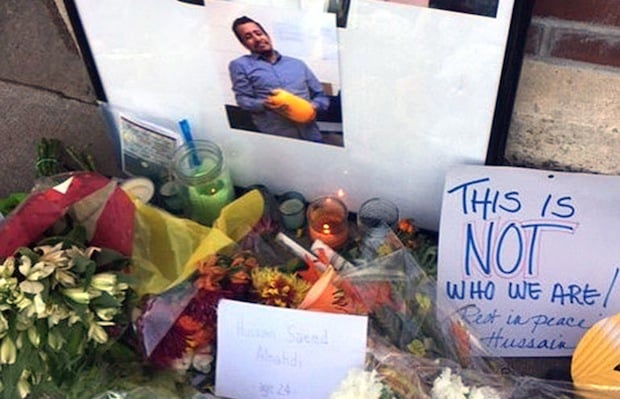 A suspect has been arrested, police said on Friday, in the slaying of a University of Wisconsin student from Saudi Arabia who was reported to have been fatally beaten outside a pizzeria in the college town of Menomonie in late October.

The victim, Hussain Saeed Alnahdi, 24, was assaulted in the early morning hours of Oct. 30 on a downtown street near the UW-Stout campus in western Wisconsin, and died of his injuries the next day at a hospital in nearby Eau Claire, according to school officials.

Authorities released little information about the circumstances of his slaying. But local media, citing a criminal complaint filed in the case, said police responding to a fight outside Topper’s Pizza in Menomonie found Alnahdi unconscious and bleeding from the nose and mouth.

The official cause of death was reported to be traumatic brain injury.

A 27-year-old man Minnesota man, identified as Cullen M. Osburn, was arrested on Thursday in the St. Paul area and was jailed on charges of felony murder and battery, police and university officials said.

Police offered no explanation for a possible motive behind the killing, which had stirred concerns on campus that the assault may have been a hate crime.

But a Facebook statement posted by Meyer on Friday quoted the criminal complaint as noting that the suspect, in statements to investigators, “was adamant that the altercation was not a result of anybody’s race.”

The Eau Claire Leader-Telegram newspaper and other media outlets cited eyewitness accounts from court documents of a man arguing with and shouting at Alnahdi outside the pizza parlor before Alnahdi was punched and fell to the ground, hitting his head on the side of a building.

One bystander told investigators she saw Alnahdi at one point raise his hands as if to indicate to his assailant that he wanted to avoid a confrontation.

The university campus reportedly enrolls some 9,600 students, a including a group of about 140 from Saudia Arabia.