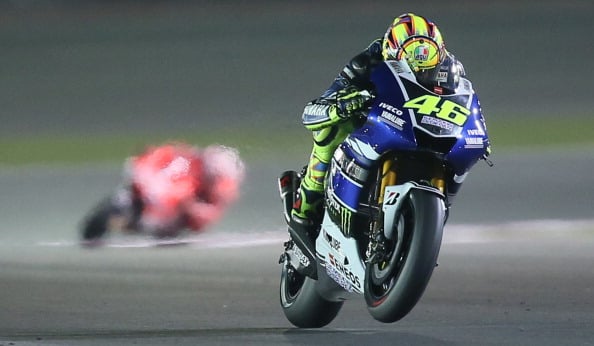 Lorenzo finished 5.990 seconds ahead of his Italian team mate, seven-times the premier class world champion, who had started seventh on the grid.

“I’m very happy because Valentino came back to Yamaha. It’s the best result for Yamaha,” Lorenzo told reporters in the pitlane as an exuberant Rossi passed by to roars of approval.

Rossi, back on a Yamaha after two years at Ducati, won a great tussle with 20-year-old Honda new boy Marc Marquez as the pair exchanged daring passes in the closing stages before the 34-year-old kept the Spanish hotshot at bay on the final lap.

“This was my target to arrive on the podium from November of last season. It could have been easier apart from the mistake at the beginning with (Dani) Pedrosa,” said Rossi, clearly elated after two miserable years away from Yamaha.

“The bike was fantastic and I think we can enjoy this season.”

Marquez was also grinning from ear to ear after pushing his boyhood idol all the way in a thrilling opener.

“It was so nice to be with him, a great battle,” said Marquez.

The second event of the season is the Grand Prix of the Americas in Austin on April 21.