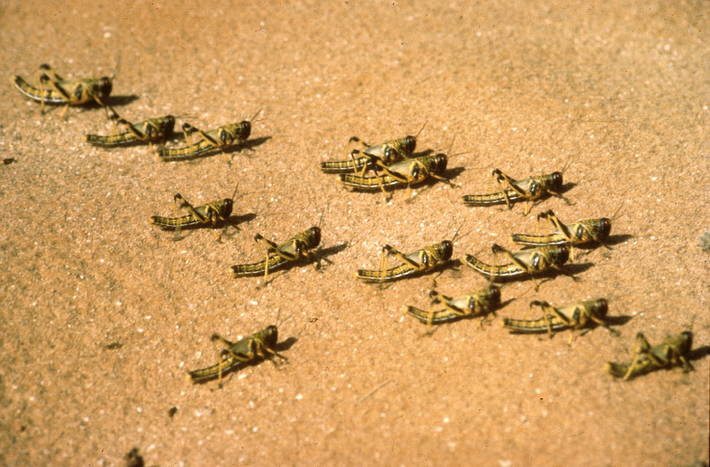 A desert locust outbreak in Saudi Arabia has evolved into a “serious threat” along the south-west coast between Makkah and Jazan, the kingdom’s ministry of Environment, Water and Agriculture has said.

The ministry’s field exploration and control teams surveyed 171,770 hectares during the second half of December and wiped out locusts from 17,296 hectares in various regions of Makkah, Al-Baha, Asir, Jazan, Riyadh, Qassim and Hail, the Saudi Press Agency (SPA) reported.

The issue is expected to worsen during the winter season, with further swarms expected to continue to migrate to the country from Sudan and Yemen.

The ministry stressed that the general situation required monitoring and intensive exploration and control throughout the key winter reproduction areas.

It also urged citizens and residents to immediately notify authorities if they observe locust swarms to help eliminate the insects.

The United Nations’ Food and Agriculture Organization (FAO) has warned that the locust outbreak – the worst in 25 years – is threatening agricultural land and crops on both sides of the Red Sea.

“A potentially threatening situation is developing along both sides of the Red Sea where ongoing breeding is causing locust numbers to increase on the coasts of Egypt, Sudan, Eritrea, Saudi Arabia and Yemen,” the FAO Locust Watch said in a statement on Monday.

“Widespread laying and hatching occurred in Saudi Arabia and gave rise to numerous hopper groups and bands, and a few immature swarms moved into the interior in late December. Hopper bands and swarms are also forming on the Red Sea coast in Yemen. More swarms are likely to form in both countries later this month,” it added.

Adult locust swarms can fly up to 150 km a day with the wind and adult insects can consume roughly their own weight in fresh food per day.